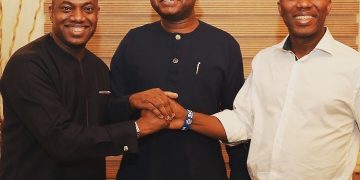 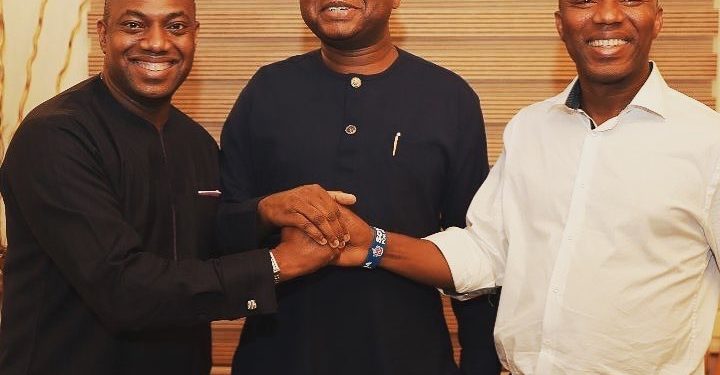 Every time I was offered ministerial appointment since 2007, I turned it down- Ezekwesili

In a statement issued this morning, he commended Ezekwesili for her “leading the charge to forming a viable coalition to presenting a Consensus Candidate formthe 2019 Presidential elections”.

Durotoye said he is ready to go into coalition talks with fellow candidates, Prof Kingsley Moghalu (YPP) and Omoyele Sowore (AAC), and is ready to support any consensus candidate that emerges from a transparent process.

“Let us come together and seize this historic window of opportunity for our generation to select one of us to go ahead of us” he said.

I have always believed that leadership is about service and sacrifice and today, I would like to commend Dr. (Mrs) Oby Ezekwesili @obyezeks for leading the charge to forming a viable coalition to presenting a Consensus Candidate for the 2019 Presidential elections.
_
To ensure that an alliance is formed and we present a united front, I AM READY to come into any coalition talks with my brothers Omoyele Sowore @yelesho and Prof. Kingsley Moghalu @moghalukingsley and to submit myself to any transparent process that will help us arrive at a selection of a Consensus Candidate from amongst us.
_
To be clear, if the process produces any other candidate apart from myself, I AM READY to support whoever the Consensus Candidate is and to do all I can to support the coalition to win the 2019 Presidential elections for our generation.
_
Once again, I implore the frontline candidates in our generation.
_
Let us come together and seize this historic window of opportunity for our generation to select one of us to go ahead of us … so that ALL OF US can come together and speak with one voice at the 2019 General Elections.
_
Together, we can do the perceived impossible.
_
Our generation is depending on us.
_
We must not let them down.
———
Signed
Fela Durotoye
Presidential Candidate
Alliance for New Nigeria (ANN) @alliancefornewnigeria

While announcing her withdrawal this morning, Ezekwesisli harped on the need for a coalition to defeat the All Progressives Congress (APC) and the Peoples Democratic Party (PDP), saying that “coalition for a viable alternative has now more than ever before become an urgent mission for and on behalf of the citizenry.”

Part of her withdrawal announcement reads:

Following the reactions of Nigerian citizens at home and abroad to the 2019 Presidential Debate held on Saturday 19 January 2019, and after extensive consultations with leaders from various walks of life across the country over the past few days I have decided to step down from the presidential race and focus on helping to build a Coalition for a viable alternative to the #APCPDP in the 2019 general elections.

In August last year, Ezekwesili monitored a process that led to the emergence of Durotoye as the consensus candidate of a coalition of political parties under the umbrella of the Presidential Aspirants Coming Together (PACT).

Moghalu, Sowore and five others opted out of the process in the dying minute, leaving 11 other presidential aspirants to participate.

After PACT seemingly fell apart, Moghalu, explaining why he shunned the process. According to him, the process was flawed and already had a predeterimined outcome even before it began.

The reasons I have pulled out of the PACT arrangement are as follows:

“1. The arrangement had unraveled even before the final selection of the consensus candidate. Only seven aspirants participated in the final voting out of the original 18 aspirants, mainly because many of the aspirants had withdrawn from the process. Four candidates who were present in the meeting this morning withdrew from the process even while the voting process was ongoing. Therefore, PACT did not produce a true consensus candidate.

“2. Clause 13 of the PACT Memorandum of Understanding asserts the supremacy of the constitutional rights of the aspirants to pursue their political aspirations.

“I therefore have chosen to continue without distraction to pursue my vision in the presidential race for 2019 in the national interest and in deference to the overwhelming outpouring of support for my candidacy from all parts of Nigeria.

“It is my humble and well-considered view that the Office of the President of the Federal Republic of Nigeria requires competence and experience in these three vital areas.

It now remains to be seen if PACT will be revived according to the wishes of Ezekwesili and Durotoye.

Why Moghalu may shun 2019 presidential coalition move by Ezekwesili, Durotoye