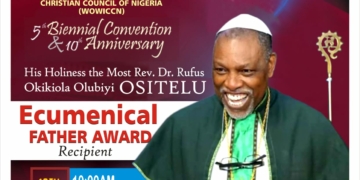 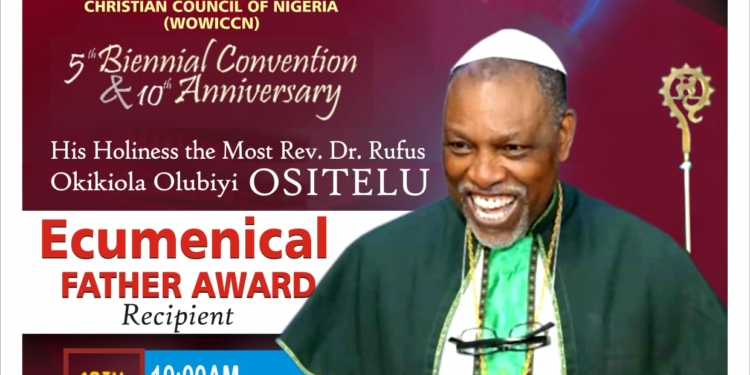 As the preparation for the  2023 general elections picks up pace, the patriarch of the Aladura Communion Worldwide (ACW) and  Primate of The Church of the Lord (TCL) Worldwide, The Most Rev. (Dr.) Rufus Okikiola Ositelu, has admonished the youths not to allow themselves to be exploited by politicians to perpetrate violence.

Primate Ositelu gave the admonition in communique issued at the end of the 2022 annual general conference of the the Church of the Lord Arch Providence of Nigeria, held between May 7 and 8, 2022, at international and spiritual headquarters of the church in Ogere Remo, Ogun State.

He urged all politicians and stakeholders to let patriotism and selfless service be their watchword throughout the electioneering campaign, during and after the election, adding that they should avoid heating up the polity unnecessarily by exhibiting the fear of God in all that they do.

The spiritual leader urged Nigerians to get their permanent voter’s card (PVC) and ensure  they vote for the candidate of their choice without fear or intimidation. He also encouraged eligible women to run for elective positions.

“Government through the Independence National Electoral Commission (INEC) should  do all that is needful to ensure that the forthcoming elections are free, fair, and credible and reflect the will of the people,” he said.

Primate Ositelu also expressed serious concern over the pathetic and worsening security situation in the country and called for the review of the security architecture of the nation.

While condemning the recent Abuja-Kaduna train attack, he stressed the need for government at all levels to combat insurgency, banditry, kidnapping and wanton destruction of lives and property and all forms of violence, adding that all the perpetrators of the train attack should be brought to book.

Primate Ositelu, who was the chairman of the conference, further said restructuring is the major panacea for the numerous challenges confronting the country, saying it will ensure good governance, equity, prosperity, peace and security.

“Corruption, the hydra-headed monster has continued to eat deep into the political and socio-economic fabric of our society with impunity, Federal, States and Local Governments should come up with more stringent measures and policies in the fight against corruption. All hands should be on deck.

“The prohibitive cost of living due to inflation is worrisome and there  is need for an urgent reversal of the situation with positive and people friendly policies and measures,” he said.

He called on both parties to take urgent steps towards immediate resolution of their disputes and bring an end to the lingering unhealthy nationwide strike with all its attendance negative consequences on the education system.

The spritual leader admonished government at all levels to invest more in the improvement of the education sector in line with international best practices.

He equally  called on Nigerians, irrespective of tribe, religion, ethnicity or political affiliations to live together in peace, love and unity, stating, “there can be no meaningful development in an atmosphere devoid of peace.”

“All religious leaders and indeed all Nigerians should continue to intercede for Nigeria, and call on God to mercifully heal our land so that the nation can enjoy lasting peace, security and sustainable development,” he added.