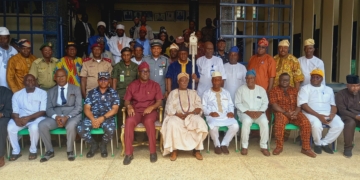 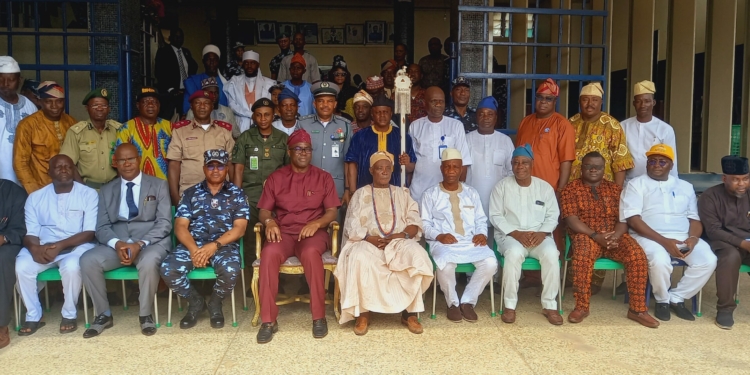 As campaigns for the 2023 general elections continue to gather pace, the candidates of all the 18 political parties participating  in the 2023 governorship election in Oyo State,on Friday, signed a peace accord at the State Police Command Headquarters, Eleyele, Ibadan.

The signing of the peace agreement was convened by the Olubadan of Ibadan land, Oba Lekan Balogun, Alli-Okunmade II.

Speaking at the ceremony, Oba Balogun, represented by the Otun Olubadan and former governor of Oyo State, Sen Rashidi Ladoja, appealed to  the candidates to go about their electioneering campaigns in a peaceful manner.

He urged the candidates to take the peace accord seriously, stressing  that the event is not just a mere formality.

“We are pacesetter in Oyo State. Apart from Abuja, I don’t think there is another place where they have signed peace accord. I appeal to the candidates to go about their electioneering campaigns peacefully. It is when there is peace you can govern; you can’t go on electioneering camapign if there is no peace.

“I implore all of you to go about your campaigns peacefully, you are all omoluabis. Some of you have been friends before you entered politics and you will still be friends after the election. I want to appeal to the Commissioner of Police to ensure there is regular interactive sessions among the candidates,” Ladoja said.

In his goodwill message, the Resident Electoral Commissioner(REC), Independent National Electoral Commission (INEC)  in Oyo State, Dr Adeniran Tella, described the signing of the peace accord as historical because it is the first of its kind since his recent deployment to  the state.

He said the signing of the peace accord is a key pointer and attestation that the 2023 election in the state would be conducted in a peaceful manner.

“As all political parties sign the peace accord today, ahead of the conduct of 2023 general elections, the Commission is poised at using technology in order to strengthen the electoral process. INEC Voter Enrolment Device (IVED) has indeed enabled the Commission to expand and improve the integrity of the nation’s voter register via crv.inecnigeria.org. The use of Bimodal Voter Accreditation System (BVAS) remains a game changer in the electioneering process. It will however be used to  to verify, authenticate and upload polling units through INEC Result Viewing (IRev) Portal via: www.inecresultelections.ng.

“Therefore, all hands must be on deck to ensure a free, fair, credible, transparent, inclusive and conclusive 2023 general elections in the state,” Tella said.

Earlier in his welcome address, the Commissioner of Police in the state, Adebowale Williams, emphasised on the need to have peaceful electioneering process  before, during and after the 2023 general elections in the state.

He urged political  parties and their candidates to comply with INEC guidlines on elections and campaigns.

“Recently we have witnessed destruction and defacing of campaign bill boards, posters and reprisal attacks.

“Our desire is that the process will encourage issue-based campaigns, and not inciting comments or slogans.

“We hope the political parties and candidates will support all institutions of government toward ensuring a peaceful  electioneering campaigns,” he said.

Williams warned that police would leave no stone unturned in dealing with individuals trying to instigate violence in the state, no matter how highly placed.

In their goodwill messages, the Director General, Department of State Services (DSS) in Oyo State, Mr E.C. Okoye; the Chief Imam of Ibadan land, Sheikh Abdul Ganiyy Abubakri Agbotomokekere; and state chairman, Christian Association of Nigeria (CAN), Apostle (Col.) Joshua Akinyemiju (Rtd), urged the candidates to promote peace among themselves and their supporters.

They urged them to be law-abiding and prevent shedding of innocent blood throughout the electioneering campaigns.