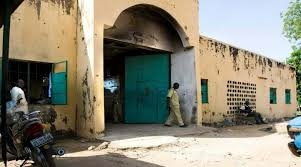 A Federal High Court sitting in Ibadan, Oyo State, on Monday, February 28, 2022, subpoenaed an officer of the Nigerian Correctional Service, Deputy Superintendent of Correction (DSC) J.O. Oyaleke, over his failure to produce in court, one Otuyalo Oluwadamilola, a defendant who is being prosecuted  by the Ibadan Zonal Command of the Economic and Financial Crimes Commission (EFCC), and remanded by the court for his involvement in cybercrime to the tune of £45,000.

A statement by the EFCC’s Head of Media & Publicity, Wilson Uwujaren, on Tuesday, said Oyaleke was served with the “summon” on February 25, 2022, to come and testify about the whereabouts of the defendant.

The officer , who is attached to Justice Uche Agomoh’s court and charged with the responsibility of producing any defendant remanded by same court, failed to produce the defendant on the December 2, 2021, which had been slated for commencement of trial.

“When asked by the court about the whereabouts of the defendant, Oyaleke told the court that the defendant was amongst the 401 inmates who fled Abolongo Correctional facility on October 22, 2021 during an attack by some bandits,” the statement said.

He further told the court that the Oyo State office of the Nigerian Correctional Service is working with relevant agencies to ensure the re-arrest of the fleeing defendant.

The defendant was arraigned in 2021 on five-count charge for internet fraud and he pleaded “not guilty” to the charges preferred against him by the EFCC.

One of the counts read: “That you, Otuyalo Oluwadamilola, between August 2017 to September 2017 within the jurisdiction of this Honourable Court took possession of the aggregate sum of N16, 638, 000.00 (Sixteen Million, Six Hundred and Thirty-eight Thousand Naira Only) paid into your account with Zenith Bank Plc-1005137906, under the disguise that the said sum was for a business transaction when you reasonably ought to have known that the said fund formed part of the proceeds of an unlawful activity, to wit: Internet Fraud, and hereby committed an offence contrary to Section 15 (2) (d) of the Money Laundering (Prohibition) Act, 2011 as amended and punishable under Section 15 (3) of the same Act.”

Justice Agomoh adjourned the matter till June 29, 2022, for mention.

Meanwhile, the Ibadan Zonal Command of the of the commission, on Monday, February 28, secured the conviction of the trio of Elegushi Mumuni Abiodun, Abdullahi Umar Faruq and Abiola Gabriel Oladimeji before Justice Uche Agomoh, on separate charges bordering on impersonation, contrary to Section 22 (2) (b) (i) of the Cybercrimes (Prohibition, Prevention etc.) Act 2015 and punishable under the same Section.

They pleaded “guilty” to the charges preferred against them by the EFCC.

Consequently, the prosecution counsel reviewed the facts of the cases and urged the court to convict and sentence the defendants as charged.

The court ordered that Elegushi pay the sum of $550 and forfeit one iPhone X mobile phone to the Federal Government of Nigeria.