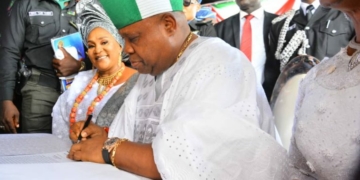 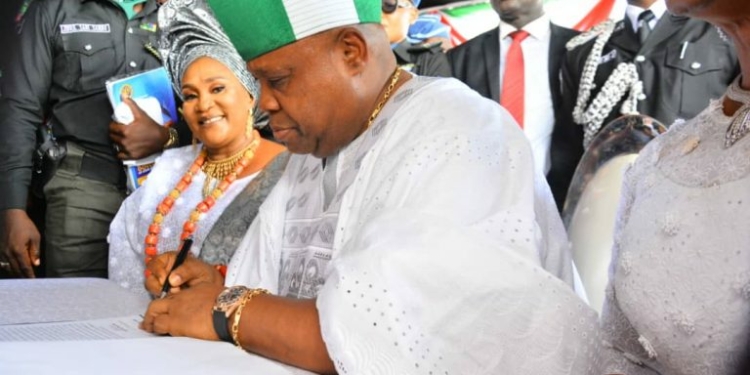 Osun State Governor, Sen Ademola Adeleke, has  said his administration did not  sack any worker or dethrone monarchs.

The Chief Press Secretary to the governor, Mallam Olawale Rasheed, stated this while featuring  on Osogbo- based radio station, Rave FM, on Tuesday.

He was speaking on  the  Executive Orders 1-1-6 issued on Monday by the governor, which cancelled employments and appointments made by former Governor Gboyega Oyetola from July 17, 2022, and also removed three monarchs appointed by the immediate past administration in the state.

Rasheed noted that the appointments and employments made by Oyetola’s  administration would be reviewed to ensure that due process was followed,adding that the executive order was misquoted.

He explained that the executive order 1 to 5 shows the intention of the administration to review, nullify and set aside, saying that the instrumentality to effecting the orders was the order 6 which is the composition of the panels. “There was never a sack of any worker or traditional ruler. We only set up review panels. It is impossible to sack and put review panels in place.

“The review panels will look at the number of the people that were employed, if due process was followed in the employment,  qualification among other things. Before our taking over, there were issues of backdating of employment, even till last year. So order 1-5 will be operationalise by order 6, which are the panels.

“Those that were employed from July 17, till our takeover are still at work presently, they have not been sacked. The staff audit will review the employment. Within four hours, Adeleke has dismantled the illegality of four months, all the bobby traps, he has dismantled them,“ he said.

Meanwhile, traditional chiefs in Igbajo and Iree communities have warned  the governor against vindictive actions.

They held that any attempt to dethrone their kings may lead to crisis and breakdown of law and order in the affected communities.

A statement signed by  the head of the Owa-in-Council and Obanla Iloro of Igbajo, Chief Micheal Ajibodu, stated that after the installation of Oba Gboyega Famodun, the new government should not disrupt the peace of the community because the past governors of the state did not dethrone any king appointed by their  predecessor.

Also, the head of Oyekun Ruling House, Iree, Pa Micheal Fajinmi, in a statement signed on behalf of five ruling houses, said Iree community is peaceful, urging Adeleke to allow the town enjoy the breath of  fresh air with the new King.

Deputy governor calls for recovery of assets under Oyetola

The deputy governor of the state, Kola Adewusi, has said it is imperative to review actions of the Oyetola administration in order to give the new administration insight and enable a smooth take off.While inaugurating the 40-member review panels.

Adewusi alleged that some assets and property of the state were mismanaged by the immediate past administration.

Be humble enough to admit your blunders, APC tells Adeleke

The All Progressives Congress (APC) in Osun State has described the setting up of various review panels by Adeleke as an afterthought and one designed to arrive at predetermined outcomes.

The party, in a statement signed by its Director of Operations, Sunday Akere, also called on the governor to settle down and study the handover notes so as to prevent the blunders he is committing.

He urged the governor to be humble enough to accept his blunders so far.

“We told you from day one that these people have nothing to offer. We can all see from their first action that they are even confused. They had told us long ago that they were coming to sack. They came and announced it. Why set up a panel after taking a decision? What they are doing can be likened to doing ablution after observing prayers. Who does that?

“You have asked traditional rulers to step aside, yet you want a panel to do a review. Are they taking up the role of the judiciary as well because we are aware that some of the cases are already in court? Furthermore, we know for a fact that our government enthroned over 20 monarchs before we left. Why focus on just three? And of these three, one was our former party chairman. Is there no political undertone in all of these?

“Nigerians must be aware that the panels are going to work from the answers. And since the answers are known, why waste taxpayers’ money unnecessarily? The governor should be humble enough to admit his blunders. He appears to lack the basic understanding of how governance works,” Akere said.

Five injured during clashes in Iwo

In another development, political thugs led by one Muri Oko Ilu attacked three motor parks in Iwo community  on Tuesday Morning order  to take control of its administration.

Five people were reportedly injured during the attack as the thugs engaged the executives of motorcycle, tricycle and NURTW in a free for all fight.

The thugs brandished dangerous weapons to scare their victims, which forced businesses and shop owners in the area to close early.

A Peoples Democratic Party(PDP) lawmaker in the House of Assembly, representing Obokun State Constituency, Adewumi Adeyemi, has denied that the lawmakers deliberated and reached a resolution over activities of  the governor.

The House of Assembly had on Monday issued a statement through it Chairman on Media and Publicity, Kunle Akande, questioning the propriety of  Adeleke’s actions over state name, anthem and the use of state crest.

However, Adeyemi, in statement he personally signed, said the lawmakers did not sit, not to talk of reviewing activities of the governor.

“My attention has been drawn to a statement which reportedly emanated from the Osun State House of Assembly and was signed by Hon. Moshood Kunle Akande.

“In the said statement, it was stated that the Assembly reviewed the inaugural speech and activities of the inauguration held on Sunday, November 27.

“As a lawmaker who attends plenary very well, I hereby state unequivocally that the Assembly has not met after the governor’s inauguration,” he said.