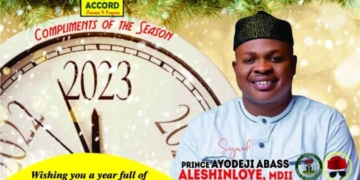 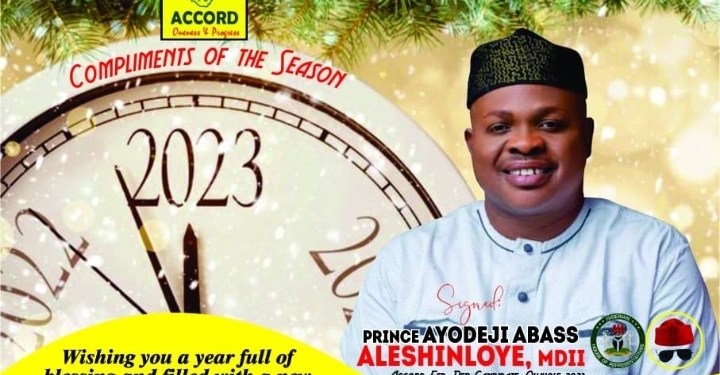 As Nigerians and people all over the world celebrate the new year, Accord House of Representatives candidate for Oluyole Federal Constituency, Prince Ayodeji Abass-Aleshinloye (MDII), has sued for unity, peaceful, religious and peaceful co-existence among all, describing them as core virtues needed for national unity, stability and development.

Aleshinloye, in his New Year message, made available by his media office, said in view of some of the recent unfortunate happenings in the country, there is a need for people in all parts of the country to tread with caution in realisation that everyone is a stakeholder in a peaceful and prosperous nation where families can be raised, livelihoods earned and where individuals can worship their creator in diverse ways.

He said unity is needed now, adding that Nigerians should ensure that comments and acts that may inflame passions or fan the embers of disunity are not promoted to avoid worsening the security situation in the country.

“Nigerians should shun religious and ethnic intolerance which is a cause of the nation’s woes.

“Looking back at all that we went through in the past year, perhaps, the time has come for us to take an introspective look at ourselves in an attempt to get to the root of our problems and challenges,” he said.

Aleshinloye urged Nigerians to reinvent the unity of purpose which existed in the sixties and seventies, saying citizen’s should draw strength from the nation’s diversity.

“It is highly imperative to ensure that the right pegs are placed in the right holes in the business of law making in order to right the wrong that have been a recurring decimal and anathema to the overall development of our dear country, Nigeria,” he said.

“As I wish Nigerians the very best that this year will bring, I implore all electorate to vote for Accord candidates in the forthcoming general election,” Aleshinloye added.