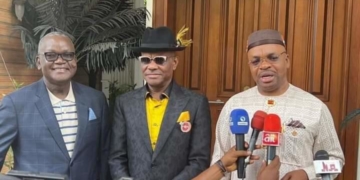 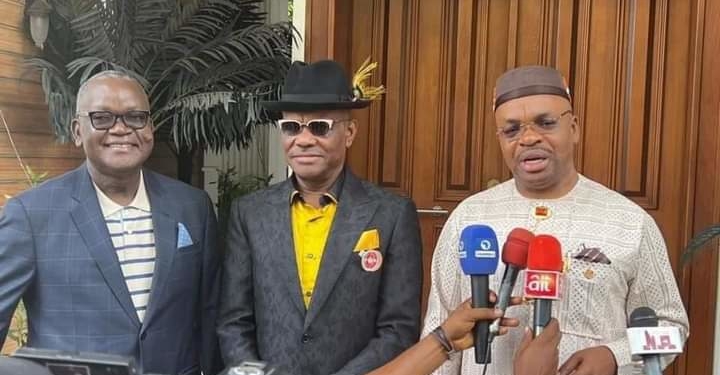 Emmanuel and Wike, who both contested the presidential primaries of the PDP won by former vice president, Atiku Abubakar, in May, have reportedly not had a one-on-one meeting since then.

While Emmanuel is leading Atiku’s presidential campaign, Wike and his allies have distanced themselves from the former vice president.

Under the G5 banner, Wike and some aggrieved governors have been criticising Atiku and calling for the resignation of Senator Iyioricha Ayu as PDP National Chairman.

But on Saturday, Emmanuel accompanied by a member of the G5 and Benue State Governor, Samuel Ortom, visited Wike, and the trio went into a closed door meeting.

After the meeting, Wike said his relationship with Emmanuel had not diminished irrespective of their political differences.

He stressed that politics should never be allowed to create unwarranted friction between brothers.

The Rivers State Governor, who described the meeting as convivial, said it was completely devoid of politics.

“Politics is not what will divide brothers and divide friends. Everybody knows my relationship with Udom, and we will continue to maintain that relationship. We may have different political affiliation or thinking, that should not divide the brotherly love or create a gap among us,” he said.

Speaking, Udom said his visit was not political, but a demonstration of brotherly love in the spirit of the yuletide season.

“Actually, this is the season of love. Within this period if we don’t demonstrate that love, love not shown is love wasted. I think that is what we are trying to demonstrate, brotherly love, friendship. And then in the spirit of the season, we must visit one another,” he said.

On his part, Ortom explained that part of their discussion also centered on how they can best add value to governance in Nigeria.

“And that if there are any issues in the past which we have done wrong, we looked at it and said look let’s forgive one another and move forward. They are private issues,” Ortom said.