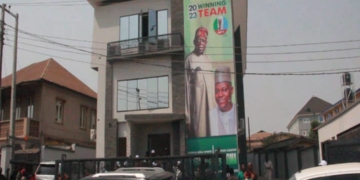 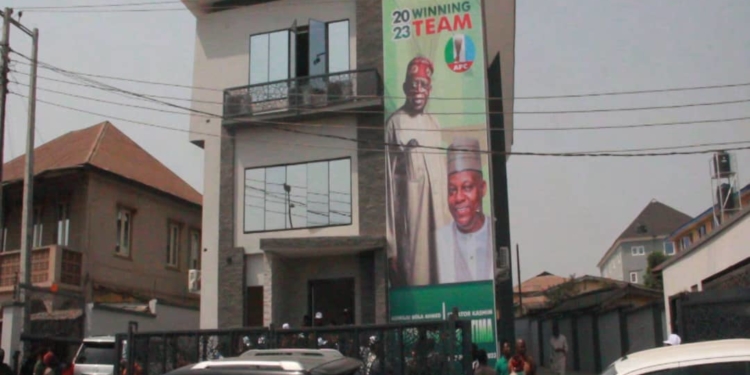 The campaign for the Presidential Candidate of the All Progressives Congress (APC), Asiwaju Bola Ahmed Tinubu, received a boost in Ibadan, the Oyo State capital, on Wednesday, as the Director for Contact and Mobilisation, South West of the Presidential Campaign Council (PCC), Alhaji Mutiu Are, led campaign directors from the six states of the South West to inspect and take possession of a two-storey edifice donated as secretariat for the campaign council.

A statement issued on Thursday by Alhaji Kehinde Olaosebikan, the Coordinator, Media and Publicity, said the directors were in Ibadan for a strategic brain-storming session of the Contact and Mobilisation Committee aimed at revving up the presidential campaign activities in the South West.

Strategically located on the popular Obafemi Awolowo Way, Oke Bola, few meters away from the residence of the late legendary leader, Chief Obafemi Awolowo, the magnificent building has about 15 rooms for offices, waiting rooms, stores, canteen and parking space.

Speaking with journalists after the inspection and sundry checks on the house, Are, who expressed satisfaction with the quality, location and suitability of the building, said that he was only contacted by the donor who told him that he was supporting the campaign for Tinubu’s presidency purely because of his belief that APC flagbearer would run a government that would bring greater peace, unity and prosperity to every part of Nigeria.

Are said he was really moved with the level of enthusiasm and commitment shown by the donor who did not want to be named and was still evidently mobilising people across the country in support of the Tinubu-Shettima presidential campaign.

The building, to serve as the South West Secretariat for the Tinubu-Shettima Campaign, according to the Director, would help in enhancing the organisation and expansion of the activities of the campaign council and enable it attend more effectively to myriads of support groups, associations and volunteers, daily indicating interests in the Tinubu’s presidential bid.

“This beautiful edifice has been donated by one of the strongest believers in the Tinubu dream to aid the Contact and Mobilisation Committee in the South West region.

“We have just inspected the building. We have also done sundry checks on it and we found it excellent in all aspects.

“The location, here, Oke Bola, close to the residence of our great leader, Chief Obafemi Awolowo, is symbolic. You know of all the candidates, it is only Bola Tinubu that has been consistently unswerving as a progressive politician. He has been, for all his life following the footsteps of Chief Awolowo, playing progressive and development politics.

“Now having our South West campaign secretariat nearby Awolowo’s house is very exciting. My committee members and I are fascinated about it. This building is suitable for the purposes of our campaigns. We are very grateful to the donor,” Are said.

The Secretary of the committee, Hon (Mrs.) Wunmi Ohwovoriole, was equally pleased with the quality and symbolic location of the building, close to the house of the late Chief Awolowo, whom she described as the bastion of progressive politics in Nigeria.

“Talking about the location of the building, it is also instructive; it is located in the heart of Ibadan. It is accessible and quite significant that we have such a big office here. The donor has been magnanimous enough to give us such a place and we are very grateful to him,” she said.

Ohwovoriole said the facility would benefit the work of the secretariat of the campaign council, especially in the coordination of the hundreds of groups, associations and volunteers working tirelessly towards the success of the APC presidential candidate.