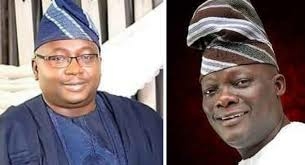 The Accord governorship candidate in Oyo State, Chief Adebayo Adelabu, has said the All Progressives Congress (APC) is still in delusion over what its chances would be in the 2023 election in the state.

Adelabu stated this in a statement made available to newmen by his campaign office over the weekend.

He noted that APC has continued to delude itself thinking the people would support a candidate with violent and criminal tendencies into such a sensitive position of governor and in the belief that it still has the support of the Oyo State voting populace.

“This is far from the truth, Oyo State voters are wiser and are now more discerning and will not support people with violent antecedent or known criminals to preside over their affairs. It is the realisation and desperation that the people have deserted the APC’s sinking ship that has led to the current violent desperation by its members. It is clear, even to the blind that the Accord governorship candidate’s growing acceptance by the discerning Oyo State voters has led APC to this sorry and desperate violent pass,” the statement read.

According to the statement, “APC in its usual desperate propaganda had wanted to sweep the unwarranted attack against the Accord candidate, which saw the destruction of several vehicles in his entourage, while the candidate escaped injury by whiskers, under the carpet instead of owing up to its part in sending thugs after Oloye Adelabu in Tede area of Oke Ogun.”

“The attackers were arrested and they confessed to the criminal act while further investigation revealed that they were members of the APC. It is asinine to now deny what the people of Oyo State have come to know about the APC and its governorship candidate who have imported violence into the political environment alongside his fellow wayfarer in the Peoples Democratic Party (PDP), Gov. Seyi Makinde, who has continued to daily empower political thugs under the guise of legitimacy.

“We know the criminals in our midst. We know the candidate that suffered the indignity of being arrested and placed, disgracefully in a Black Maria over the death of a former chieftain of the National Union of Road Transport Workers (NURTW) and who was only saved from the hangman’s noose due to intervention from Abuja.

“It is thus not surprising that thuggery, violence and brigandage, which the late former governor and progressive leader, Abiola Ajimobi, had eradicated during his eight years of peaceful administration is gradually finding its way back into the state. One wonders how Ajimobi would feel if the dead have the ability to physically intervene in the affairs of men; his regret would be that he had empowered someone on the brink of political oblivion who has now taken over APC, pretending to be a democrat,” it added.

The camapaign office noted that Oyo State voters have come to the realisation that they would be best served by a candidate who had always shown his love to them the way Adelabu had done by investing massively in the state and employing about 3000 workers.

“Who among the current governorship aspirant can boast of such achievement?
The different hotels and apartments of Adelabu are business concerns and no one can stop anyone from patronising the apartment. In any case, Yahoo boys do not write on their foreheads who they are. However, it takes a criminal to also recognise one of their own.

“Today Adelabu can campaign on his personality, antecedent and his achievements. He can campaign that he superintended over the Security Fund of Oyo State during the tenure of late Gov. Ajimobi and that the state witnessed peace while the administration lasted.

“He can campaign that he was a key player in the establishment of the First Technical University, fully owned by Oyo State; a university that the current administration is parading as a selling point for itself.

“The same cannot be said of the APC governorship candidate who had been in the Senate for three terms and who can not point to any known achievement until APC started the search for a not so visible achievement for him with a torchlight that has grown dim after unsuccessfully looking for what does not exist.

“Folarin now wants to ride on the back of Asiwaju Bola Ahmed Tinubu, the APC presidential aspirant to victory, that will not work in today’s Oyo State. We want to urge him, if he has that good name to campaign with to do so and see where it would get him. In any case, the Asiwaju team have continued to treat him with a long pole and would not publicly associate with him.

“The people will still remember that the last party appearance of Tinubu, he refused to endorse his candidature. The story has not changed because they know a candidate that is a trader that will willingly trade away their mandate having shown that tendencies by his support of the failed presidential ambition of Kogi governor, Yahaya Bello, and moving to support Vice President Yemi Osinbajo before trying to perch with the Tinubu camp who still sees him as an untrustworthy “ally,” the statement concluded.

Meanwhile, the All Progressives Congress (APC) in Oyo State has denied involvement or culpability in the reported violent attacks on the Accord governorship candidate, Adelabu, and urged the police and Department of State Services in the state to immediately investigate the veracity of the claims, with a view to establishing whether or not the attack actually happened and possibly apprehend the culprits.

Reacting in a statement made available to journalists in Ibadan by its Publicity Secretary, Olawale Sadare, Oyo APC said that “the accusation from Adelabu was not only ridiculous but also reckless and regrettable as it has exposed the Accord candidate as the most celebrated clown in the current political dispensation as far as Oyo state is concerned.”

“We have a good reason to doubt the claims of attacks by the former deputy governor of the Central Bank of Nigeria (CBN) in view of his ceaseless exhibition of desperation to become an elected governor after he had wasted the princely opportunity which came his way in 2019. Also, the place where he claimed to have been attacked is not known for harbouring agents of political violence while the ruling party notorious for sponsoring such attacks might not even need to strike in Oke Ogun for obvious reasons.

“Adelabu claimed three of his attackers who were arrested confessed to be working for us (Oyo APC) but we find this statement utterly reckless, irresponsible and defamatory. It is on this note that we are calling on the authorities of the Nigeria Police, Department of State Services and other relevant security agencies to immediately launch a thorough investigation into the matter and make public their findings for the whole world to know the truth.

“For the avoidance of doubt, neither Oyo APC nor any of our candidates or leaders (including our gubernatorial candidate, Sen. Teslim Folarin) is harbouring miscreants who could be sponsored to attack anybody and we would not watch while Mr. Adelabu or anyone for that matter who feels the best way for him to secure sympathy from the electorate is to ceaselessly drag our reputation in the mud.

“It is on record that while the internal process aimed at producing the candidates of our party for the 2023 polls lasted and Adelabu was with us, there was never a time anyone raised a finger against him regardless of his penchant for direct provocation and cheap blackmail of perceived opponents. This tells a lot about our enviable credentials as democrats and peace-loving political players while our major concern now is how to mobilize electorate in the state to vote all the candidates of the APC, including Sen. Bola Tinubu as the next President of Nigeria, Sen. Teslim Folarin as the next governor of Oyo State and so on.

“We had warned the dog not to break away from the camp of the tiger in the popular campaign to ward off the menace of a rampaging wolf, but Adelabu would not listen. Now that the reality of another electoral failure is dawned on him and his naive supporters, we can only admonish them to swallow their pride and come back home before it is too late. The 2023 race for Agodi Government House will not be won on the basis of one’s grandfather’s name or his boast of controlling hotel facilities where most young internet fraudsters waste the proceeds of their criminal activities,” Sadare stated.