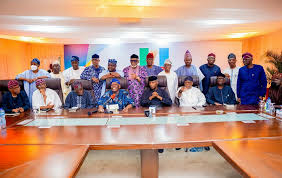 The moves by South West leaders to come up with a consensus presidential aspirant for the region may have hit the rock as Vice President Yemi Osinbajo and All Progressives Ccongress (APC) National Leader, Asiwaju Bola Tinubu, are said to be adamant on being the region’s consensus candidate, Daily Trust reports.

Political leaders from the South West geo-political zone on Sunday continued with their moves to present a common front ahead of the presidential primary of the ruling APC slated for Tuesday.

Promoters of the consensus move in the South West including former APC Narional Chairman, Chief Bisi Akande, and former Ogun State Governor, Olusegun Osoba, had met with the aspirants at the Abuja residence of Osoba.

The meeting, which was attended by the aspirants from the South West, governors and elders fron the region ended without them reaching a consensus.

The duo of Akande and Osoba had last month met with the aspirants in Lagos, where it was agreed that they should conduct their electioneering campaigns devoid of hostility, free of rancour and in an amicable manner.

President Muhammadu Buhari had on Saturday urged presidential aspirants of the APC to consult, build consensus and come up with a formidable candidate ahead of the party’s presidential primary. The directive of the president came around the same time when northern governors asked him to source for his successor from the southern part of the country.

The President’s consultations continued yesterday with the National Advisory Council of the party.

In a statement issued by Femi Adesina on Sunday night,  Buhari had appraised the series of consultations held so far towards getting a widely acceptable presidential standard bearer, saying APC is on the way to recording its third straight victory since 2015.

“I am optimistic that the outcome of this consultation with the National Advisory Council will in addition to sharpening our focus, help to fortify the positive democratic principles, practices and culture that already exists within the party system.

“In the course of these consultative processes, I have already met separately with the Progressive Governors and with all our eminent members who are aspiring to become the presidential flag bearer for our party during the 2023 elections.

“I am pleased to inform you that those meetings have been fruitful and indicative of a party that is prepared and marching towards a third straight victory since 2015, at the presidential polls,” Buhari said.

According to the medium, while the meeting was ongoing in Sunday night, the duo of Osinbajo and Tinubu were not ready to shift grounds as they have continued to intensify their consultations and engagements with delegates.

It was gathered that while some of the aspirants were ready to shift grounds, Osinbajo and Asiwaju are not.

“We expect both Asiwaju and VP to slug it out as efforts to persuade one of them to step down have not yielded results as of now,” the medium quoted a source who spoke on condition of anonymity.

The duo of Akande and Osoba, who have been making efforts to arrive at a consensus among aspirants from the South West, have rejected several efforts to comment on the move.

The Director of Media & Communications, Tinubu Campaign Organisation, Bayo Onanuga, said the party is looking forward to a free and fair contest at the convention.

“We are going into the convention for a free and fair contest. Everybody is looking out for a delegates’ election,” he said.