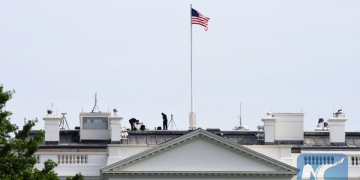 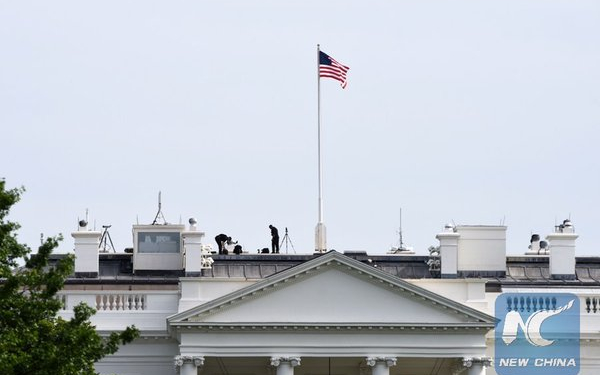 The US Secret Service shot an armed man at a security checkpoint outside the White House Friday, causing the complex to go into lockdown.

President Obama was on a golf outing at Andrews Air Force Base in Camp Springs, Md. when the shooting occurred. A White House official said no White House employees were injured, and that Obama was briefed about the situation.

The incident happened at 3.06 p.m. at a security gate at 17th Street and E Street N.W., on the west side of the White House complex where employees enter. Law enforcement agencies had originally given conflicting accounts of where the shooting happened; the Secret Service said it was outside the security perimeter.

The suspect was brandishing a weapon, and a uniformed Secret Service officer gave him “numerous verbal commands for the subject to stop and drop the firearm,” said Secret Service spokesman Samuel Reed Jr. The officer shot the suspect once, and he was taken to a local hospital.

With temperatures in the low 70s, Pennsylvania Avenue was packed with tourists Friday afternoon. Secret Service told people to evacuate the area and pushed a safety perimeter at least another block from the White House.

Steve Snider, a tourist from Seattle, said he was on Pennsylvania Avenue taking photos of the White House when the Secret Service started screaming for everyone to clear the street.

“The first thing I knew, they were screaming for us to get back from the White House,” he said. “It was scary.”

Obama had left the White House shortly after 1 p.m. for a rare Friday golf outing because he’s leaving for Vietnam on Saturday. His motorcade left out of a gate on the eastern end of the White House complex, away from where the shooting took place.

Vice President Biden was in the White House complex and was immediately secured after the shooting, his office said.

Atiku to set up animal feeds factory in Abuja