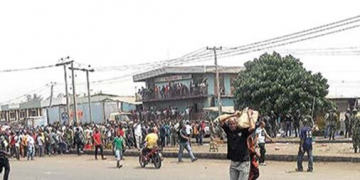 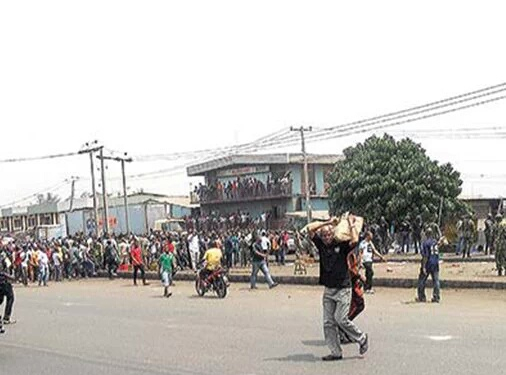 There were reports of heavy shooting on 4th Avenue, Festac town, Lagos this afternoon, with some claiming that it was a robnery attack on so,e banks in the area.

The social media was awash with reports, one of which read:

Heavy Robbery Operations going on @ 4th Avenue, Festac Town, 2banks @ ago 1. Diamond 2. FCMB…Nigeria Army please help us, this one pass Nigeria Police matter and also fellow 9ja stay away from 4th Avenue 4 now, because of flying bullet, an innocent citizens just died and the robbers are even taking their time…Na waooooooo. I beg rebroadcast to save a life

The attackers were said to have invaded the town through the waterways.

But the Lagos State Police Command has issued a statement debunking the reports.

“The attention of the Lagos state command has been drawn to a false alarm been raised and circulated on social media about armed robbery operations going on at 4th Avenue, Festac Town, in three new generational banks and at the same time the killing of a customer today, 15th day of July 2016.

“The command wishes to inform members of the public that this story is just a figment of imagination of the initiator; it is not anyway or part true and so should be treated as such and by extension discarded.

“The Command has put in place strategies which has in a long time ward off any form of bank robbery in the state, as it remains resolute in ensuring no bank robbery or any form of robbery happens again in Lagos state.

“However residents of Festac Town and Lagos at large are hereby assured of the Command’s commitment to their safety and security. Members of the public are hereby advised to verify information before circulating to avoid creating unnecessary panic and feelings of insecurity, and to promptly report any form of criminality to the police.”

TERRIFIC! PHOTOS of parents with their five children...All GIRLS, All LAWYERS!!!