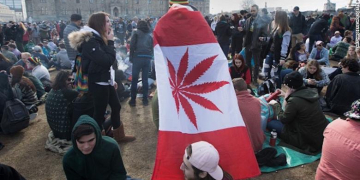 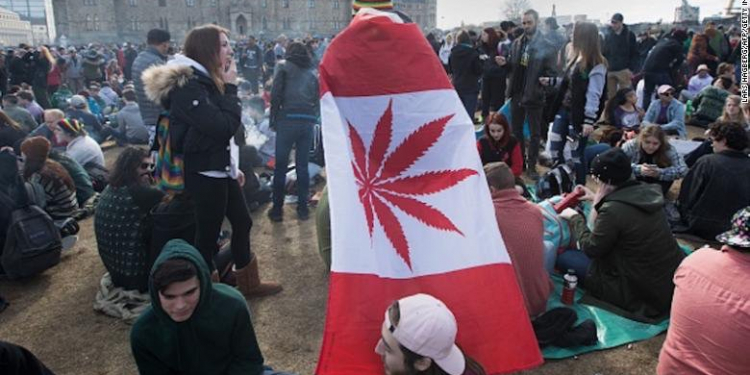 Use and sale of marijuana is now legal in Canada which becomes the second and largest country with a legal national cannabis (marijuana) marketplace.

Canadians will now be able to order marijuana products through websites run by provinces or private retailers and have it delivered to their homes by mail.

According to Associated Press, Tom Clarke, an illegal cannabis dealer for three decades, was among the first to make a legal sale in Canada when his store opened at midnight (02:30 GMT) in Portugal Cove, Newfoundland.

“I am living my dream. Teenage Tom Clarke is loving what I am doing with my life right now,” he rejoiced.

An AP survey says that at least 111 legal cannabis shops are planning to open across the nation on the first day. Many Canadians have queued up in stores waiting to buy cannabis as freely as they would buy a cup of coffee.

Hours before retail outlets opened, a federal official told AP Canada will pardon all those with convictions for possessing up to 30 grams of marijuana, the now-legal threshold.

A formal announcement was planned for later Wednesday. The official, who was not authorized to speak publicly ahead of the announcement, said those who want to take advantage of the pardons will have to apply.

Canada has had legal medical marijuana since 2001 and amid excitement over the arrival of legal recreational cannabis many in the industry spent the last days of prohibition on tasks familiar to any retail business – completing displays, holding mock openings and training employees to use sales-tracking software.

Prime Minister Justin Trudeau and his cabinet spent about two years planning for legalisation, fueled by a desire to bring dealers like Clarke out of the black market and into a regulated system.

Canada’s national approach has allowed for unfettered industry banking, inter-province shipments of cannabis and billions of dollars in investment – a sharp contrast with national prohibition in the United States. Nine US states have legalised recreational use of cannabis and more than 30 have approved medical marijuana.

“Now that our neighbour to the north is opening its legal cannabis market, the longer we delay, the longer we miss out on potentially significant economic opportunities for Oregon and other states across the country,” US Democratic Senator Ron Wyden of Oregon said in a statement.

Each province in Canada is however making its own legislations wothin the framework of the new federal government legislation.

While some are operating government-run stores, others are allowing private retailers. Some others allow both government and private stores.

No stores will open in Ontario, which includes Toronto. The most populous province is working on its regulations and doesn’t expect stores until next spring.

Alberta and Quebec have set the minimum age for purchase at 18, while others have made it 19.

The provinces also have been able to decide for themselves how much to mark up the marijuana beyond the 10 percent or $1 per gram imposed by the federal government, and whether to allow residents to grow up to four plants at home.