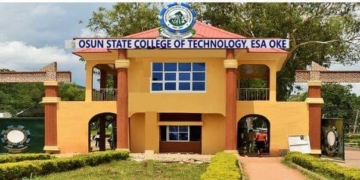 The Rector, Osun State College of Technology, Esa Oke, Dr Samson Adegoke, on Monday, escaped death by a whisker when his vehicle was reportedly shot at by suspected assassins.

According to reports, Adegoke had left Esa Oke for Ilesa town some minutes before 4pm, when suspected assassins travelling in a Toyota Camry opened fire on his vehicle.

Although Adegoke and his driver escaped unhurt, the vehicle he was travelling in was reportedly badly damaged as a result of the bullets fired by the assailants.

Adegoke confirmed the incident while speaking to news men, adding that the attack was reported to the police in Ijebu Jesa.

“It happened between 3:30 and 4 pm on Monday at Eti Oni junction, (an area between Ijebu Jesa and Esa Oke). I was coming from school (Esa Oke), and a Toyota Camry was trying to drive against traffic and overtake us.

“Unfortunately for him, a tipper was coming, so the car could not overtake us. And we were able to go ahead. Thereafter, the car drove close to us and opened fire but we didn’t stop.

“We were going until the vehicle could no longer move again. I reported the incident to the police at Ijebu Jesa police station and they are on it. Police said they are taking steps,” he said.