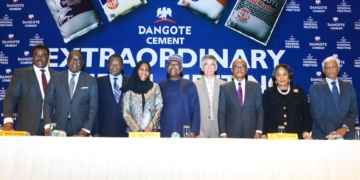 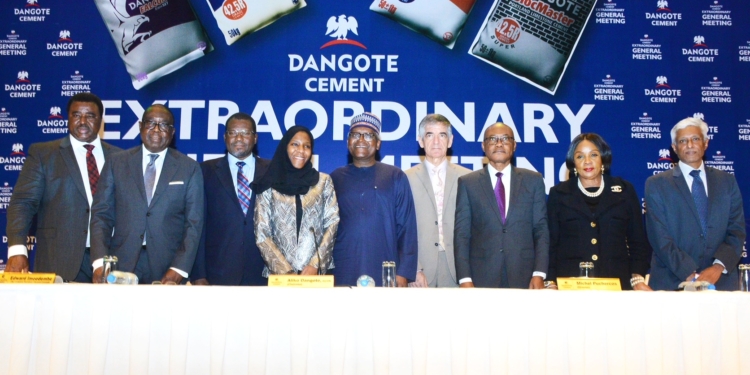 Dangote: Our acquisition of Obajana cement plant followed due process

Dangote Cement shareholders have unanimously authorised the management of the company to undertake a share buy-back of up to 10 per cent of its issued shares, effective from the date of the resolution.

The company had earlier showed interest in undergoing a share buy-back programme, in respect of up to 10 per cent of its issued shares, for the purpose of improving the company’s return on equity and its shareholders’ value, so as to facilitate the future long-term growth of the company.

The approval through voting, which was given at the company’s Extraordinary General Meeting, in Lagos recorded a 100 per cent approval from the shareholders, with many of them describing the exercise as very laudable and a win-win situation for them.

Among other resolutions, the shareholders authorised that: “Memorandum and Articles of Association of the company be amended (as applicable), upon completion of the share buyback, to reflect the company’s share capital, following the cancellation (if any) of the shares acquired or otherwise held by the company.”

The Board was also authorised to ensure that the amendment of the Articles of Association of the company reflects the company’s share capital, following the cancellation of the shares acquired or otherwise held by the company.

It would be recalled that the shareholders, at the company’s recent 13th Annual General Meeting (AGM), also commended the management of the company for an impressive performance despite the economic challenges in the year under review.

Unanimously, they approved N20 per share for the year ended December 31, 2021, as against the N16 paid in the preceding year. That represented a 25 per cent increase in dividend compared to the 2020 dividend of N16.00 per share, reinforcing the Company’s commitment to maximising shareholder value.

They also applauded the company for its drive in reducing unclaimed dividends of the company.

Dangote Cement in the year under review achieved its highest profit before tax in its history at N538.4 billion. Also, the Company recorded Group volumes of 29.3Mta, up 13.8 per cent. Exceptional EBITDA of N684.6 billion was achieved, up by 43.2 percent owing to strong cost control measures.

Chairman of the company, Aliko Dangote, said that over the last decade, Dangote Cement has recorded exponential growth across all areas.

He said: Group volumes are now at almost 30Mta, our capacity has tripled to 51.6Mta and we export cement from five countries across Africa.

“As the volatile global environment propels us into a new era of uncertainties, we are fortunate that the last two years have taught us resilience, adaptability, and grit. These values are what we need to face in unpredictable times in the future.

“Dangote Cement remains the leading cement company in Africa, well-positioned for a positive and sustainable future. We are resolute in transforming Africa while creating sustainable value for our stakeholders.”