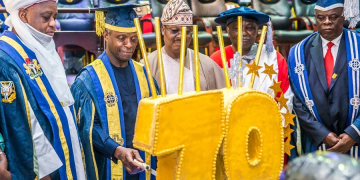 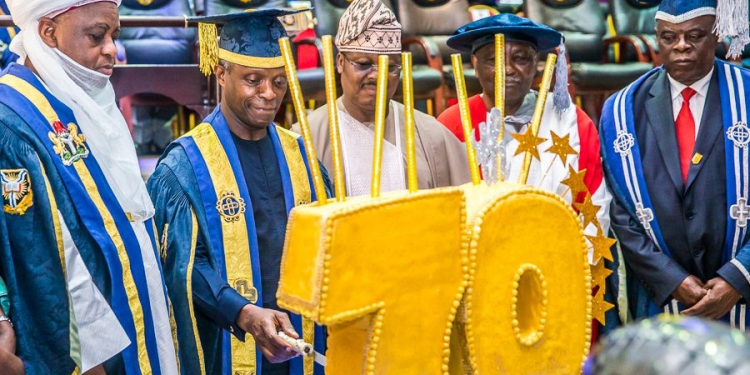 President Muhammadu Buhari on Saturday stated that Nigerian universities cannot be fully funded from the country’s budget, hence the need for creativity on the part of the universities as well as the government.

He said this at the convocation ceremony of the University of Ibadan which coincided with the institution’s 70th anniversary.

Buhari, who was represented by the Vice President, Prof. Yemi Osinbajo, acknowledged that the Academic Staff Union of Universities (ASUU) has a point for their ongoing strike, but, pleaded that the institution’s look at several funding options which include leveraging on alumni and partnership with the private sector.

He stated that government was already considering several options, some of which
“will involve raising funds from the capital market to give a push to the infrastructure in our universities.”

He added: “There is no question that ASUU has a point. However, we must seek to resolve amicably and with minimum disruption to the academic calendar. The issue really is that there is no doubt whatsoever that education is under-funded and we must fund it even with the best. But even with the best effort at attending to funding education from the budget, it is completely impossible to do so.

“None of the universities, especially in the free world, is fully or even substantially funded by the government. The task of fund-raising is precisely what the universities are established to do; to solve problems and to create solutions that uplift the society. We can creatively address the issue looking at other solutions around the world. One of the solutions that we must explore is alumni network. There is perhaps no university in Nigeria that has the kind of alumni network today that the University of Ibadan has.

“There must be ways to cultivate this alumni network at home and in the Diaspora and to get them to support the universities. In this digital era, things have been made a lot easier to keep in touch with the large number of people around the world to pass information that will convert it to philanthropy.”

While lauding the outstanding achievements of the University in the past 70 years with the production of many academics in various fields of study with their pioneering work in research and development, Osinbajo added that “every generation is, whether it knows it or not, equipped to deal with the challenges of its times and to hand over a legacy to enable the next generation to navigate its own journey with greater ease. University is of course a place where the direction and instruction must come.

“There are, in my opinion four big issues that call for incisive thinking, that will be able to solve the problem. The first is the population challenge and the opportunities. The second challenge is the climate change and the threat of desertification. Today, Lake Chad which used to be about 35,000 square meters is now 1,350 square metres and several other signs of desertification.

“The third is the education challenge. That is how to chart a course for the education of these young people for the competitive globalised knowledge economy. Also is how to equip teachers with the skills required, and the numbers that are required to train the very many millions coming behind us. How do we fund education to prevent the slide in standards in the past two decades and the frequent disruptions of their educational calendar due to strikes?

“Taking the first issue, it is evident that technology has radically changed both the challenges and opportunities in education, giving the limited resources and gaps in the educational attainment in our country. It was clear to us that as a government, we have to change both the substance of, and also the way our children receive education. In other words, the efforts by which our children are taught. We identified every stage investments in primary and secondary school education as being key to a knowledge-based economy.

“How do we train teachers quickly and efficiently aside from the traditional teacher training institutes which must be refitted to deal with the new technology-driven federal government. We have hired over 500,000 young men and women for our N-Power programme using the technology developed by our young people. We provided them with electronic tablets for teaching at both rural and urban areas. In the next few years, both teacher training and teaching will be largely driven by technology.

Earlier, the Chancellor of the university, the Sultan of Sokoto, Alh. Muhammad Sa’ad Abubakar, also commended the premier university for having blazed the trail in research and teaching in virtually all branches of knowledge in the last 70 years. He said UI’s achievements are globally recognized.

Abubakar noted that universities needed to generate knowledge and research which address societal challenges while matching their products with the need of the society..

While congratulating the graduands, the Vice-Chancellor, Prof. Idowu Olayinka, reminded them that the university and society have high expectations from them.

He disclosed that: “A total of 371 candidates spread over 12 faculties and five Institutes and Centres were admitted into the Doctor of Philosophy Degrees of the university with the Faculty of Arts leading the pack with 64 graduands”.

Other dignitaries at the ceremony include a former military Head of State, Gen. Yakubu Gowon; the Chancellor Nde Waklek Mutka; Minister of Education, Mallam Adamu Adamu, represented by the Registrar of the Joint Admissions and Matriculation Board(JAMB), Prof. Isiaq Olojede; Governor Abiola Ajimobi of Oyo State; Minister of Health, Professor Isaac Adewole; the Olubadan of Ibadanland, Oba Saliu Adetunji (Aje Ogunguniso 1), and the President of the Christian Association of Nigeria (CAN), Dr. Samson Ayokunle.