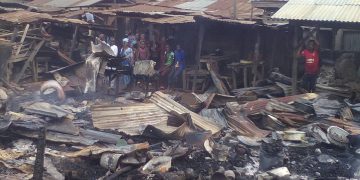 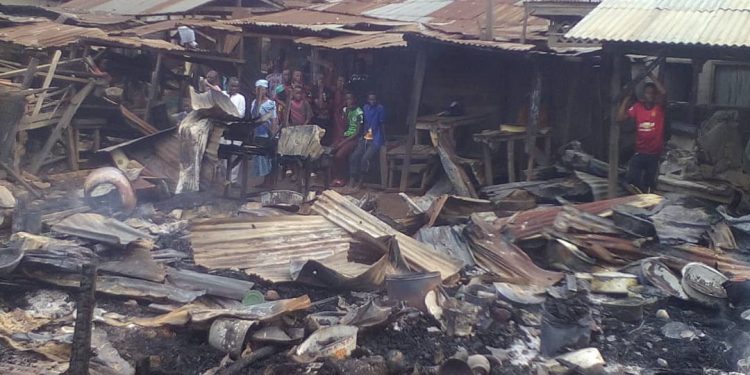 Traders at Orita-Aperin Market, Ibadan, are counting their losses after an early mornng fire that gutted the market.

The Babaloja of Orita-Aperin market, Abiodun Hammed, who spoke with journalists at the scene of the incident on Saturday, said goods worth millions of naira were lost to the inferno, adding that the cause of the incident was yet to be known.

He said the fire started around 12 midnight on Friday, “and we immediately called on Oyo State Fire Service but unfortunately, when they got here, the norsel of their truck was not functioning, so we had to resolve to self help by putting out the fire ourselves, or else, the loss would have been more than this.”

He explained that shops affected included those dealing in jewelries, food stuffs, provisions, palm oil amd herbs. The jewelry shop was said to have lost more than N5 million goods.

He however appealed to the Oyo State government to come to their aids because the loss was too much for the victim to bear.

Meanwhile, the Oyo State governor, Engr. Seyi Makinde, has commiserated with victims of the dire disaster.

The Governor, in a statement made a available to newsmen by his Chief Press Secretary, Mr. Taiwo Adisa, commiserated with the victims of the fire incident, saying that his government would get to the roots of the sad incident.

The statement read: “I condole with the market men and women who lost their valuables to the fire incident. It saddens me to hear this is happening at a time we are putting heads together to expand the economy of this state and put more money in the pockets of our people.

“It is particularly painful that the incident happened in the dead of the night when many of the shop owners were far asleep. I learnt that many shops that were recently stocked were affected.

“Please take heart as we take measures to forestall such occurrences.”

The Governor also vowed to get to the roots of the incident, adding that devastating fire incidents of such will not be allowed to happen anywhere in the state.

He further said: “Let me assure market leaders, market men and women, especially those affected by the Aperin fire incident to be rest assured that the government of Oyo state will not abandon them to their fate at this time. “We will not only unravel the cause of the fire but will also ensure that we do what is within our powers to support the victims of the incident.”