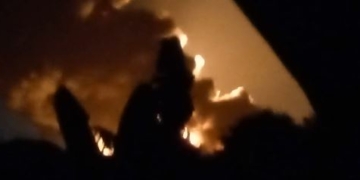 The Independent National Electoral Commission (INEC) office located within the premises of Ede South Local Government Area, in Oke Iresi, Ede, has been gutted by fire.

According to eyewitnesses, smoke was observed from the conference room of the secretariat around 10am.Fire fighters were immediately called to the scene.

It was gathered that the quick intervention of the men of Osun State Fire Service, limited the inferno to only the conference room of the building.

The conference room was said to have been completely razed, with furnitures and other items completely destroyed.

Several items including knife, slices of bread, a keg containing petrol and a fez cap were recovered from the scene of the fire incident, raising suspicion of an arson.

Confirming the incident,
the INEC Public Relations Officer in Osun State, Seun Osimosu, said, “REC is on his way to inspect the scene. We will respond appropriately soonest.”

Atiku: Alliance between Buhari, Tinubu will collapse after their defeat in 2023