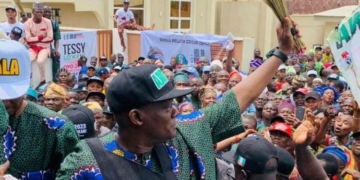 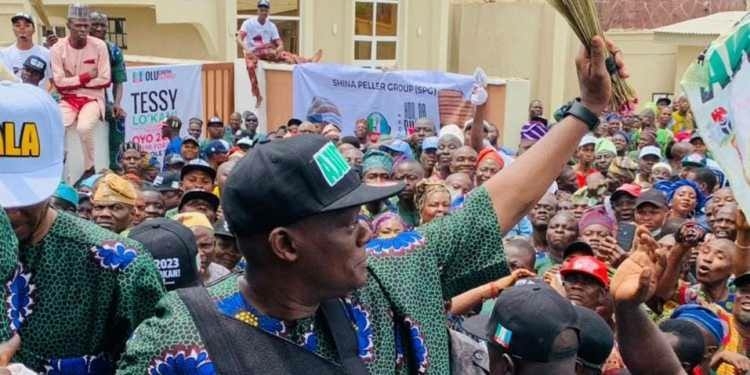 The governorship candidate of the All Progressives Congress (APC) in Oyo State, Senator Teslim Folarin, has said he offered to serve the people in order to rescue the state from the claws of the “most visionless government in the history of the pacesetter state.”

Folarin stated this at the official flag off of the All Progressives Congress (APC) campaign for the 2023 elections, held at the Oba Lamidi Adeyemi III stadium,opposite the palace in Oyo town, on Monday.

Our campaign themes are:FORWARD OYO STATE for Growth and Development

Speaking on his campaign, themed: ‘Forward Oyo State for Growth and Development (Itesiwaju Ipinle Oyo),’ the APC governorship candidate said he is poised to invest in policies that will drive economic development, provide a sea of opportunities for the teeming populace, improve healthcare, agriculture, education and infrastructure, in order to make the state an investment hub and preferred destination for industrialists.

“Barely two years after the inauguration of the present administration in Oyo State, I was inundated with calls from critical stakeholders across all walks of life on the pertinent need to rescue our dear state from the claws of the most visionless government in the history of the pacesetter state with a view to moving the state forward for growth and development.

“For more than three years, all areas of governance in Oyo State have largely been kissing the canvass. From all indices, it is apparent our people, instead of enjoying dividends of democracy, are suffering from a government where institutional rigidity, exclusiveness, pervasive insecurity, policy summersaults, monumental debt and inoperable economic ideas reign supreme. Despite being blessed by providence with surplus human and capital resources, our people are made to live under severe hardship and excruciating frustration as a result of receding opportunities.

“Hence, my decision to offer myself to serve the good people of Oyo State as Governor from May 29, 2023. My aim is to form a pact with the good people of Oyo State through an invaluable blueprint that is anchored on a mission to move Oyo State forward for growth and development. Our government shall be established on a mission that will prioritise functional and qualitative education for all school-age children, productive mechanized agriculture, efficient and affordable healthcare delivery for all, irrespective of age, gender and status; massive industrialization, strongly supported by expansive agricultural value chain; employment generation with emphasis on entrepreneurship and innovation; urban renewal and rural infrastructural development.

“Our government shall secure Oyo State, where every lawful citizen shall have no reason to fear or fret,”he said.

Folarin also blamed Governor Seyi Makinde for the decline in the standard of education in the state.

He lamented that under Makinde’s administration, Oyo State education is in comatose. Hence, the need for holistic intervention of responsible and responsive government.

“Under Governor Seyi Makinde-led PDP administration, Oyo State ranked 33rd in external examinations and recently, 50 secondary schools were blacklisted and delisted by WAEC. The sad developments are unprecedented in the history of Oyo State.

“The most worrisome aspect of PDP government in Oyo State is the continuous leadership failure characterised by maladministration at all levels as a result of incompetence, state-sponsored insecurity, crippling of local government administration, poor state of infrastructure, consultancy policy in tertiary institutions, growing debt profile, dereliction of duties and among others,” he added.

Foalrin urged residents of the state to join him on the “Rescue Mission” to restore the dignity and pacesetting status of Oyo State.

“Let’s elevate Oyo State from the nadir to the zenith of good governance, where it truly belongs,” he said.

Speaking, the state chairman, Mr Isaac Omodewu, congratulated the candidates and party members, saying the APC was waxing stronger in the state. He presented the party’s flag to House of Assembly, House of Representatives, Senatorial candidates and Folarin, who is the governorship candidate.

He urged the mammoth crowd to vote for all the candidates of the party in the 2023 general elections.

The ceremony was attended by party leaders including Sen. Musiliu Obanikoro, Chief Jelili Adesiyan, leader of the party in Oyo State , Chief Iyiola Oladokun, Sen. Olufemi Lanlehin among others.

Some of the leaders including Obanikoro and Adesiyan took turn to address the crowd. They urged them to mobilise voters for all the candidates.