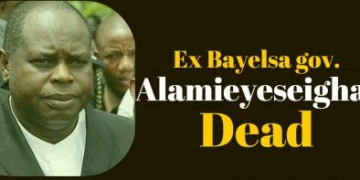 The Bayelsa State Commissioner for Information, Esueme Dan-Kikili, confirmed to Channels TV that the former governor died of cardiac arrest on Saturday.

He said the former governor slipped into a coma two days ago and was placed on life support.

There were reports during the week that the British Government was determined to resurrect an outstanding case of money laundering against the former governor and had requested for his extradition to London.

Alamieyeseigha, who was facing money laundering charges, jumped bail and returned to Nigeria and has since then refused to answer summons for trial to continue.

Enyeama apologises to Nigerians over exit from Super Eagles