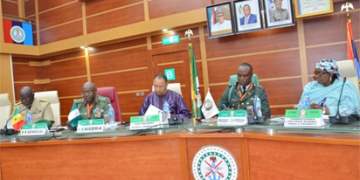 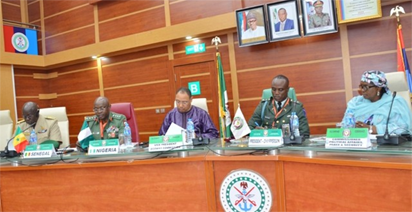 What looks like plans to deploy of peace keeping troops to Gambia in the wake of ongoing electoral dispute involving the country’s President, Yahya Jammeh and his contender in the December 1 presidential election, Adama Barrow, appears glaring at the weekend, as the regional service chiefs held what source consider as strategic security meeting aimed at taking action in the tiniest West African nation.

The meeting, according to Vanguard, was at the instance of Nigeria. It was hosted by its Chief of Defence Staff, Abayomi Olonisakin.

Although the press was not privy to the high-level West African security gathering in the Nigeria’s federal capital city, the official website of the Defence Headquarters confirmed the development through pictures of the event.

According to the pictures found on the Defence Headquarters’ site, those at the one-day event included the chairperson of ECOWAS Chief of Defence Staffs, Brigadier General Daniel Ziankahn of Liberia; CH Gueye of Senegal; ECOWAS Commissioner for Political Affairs, Hajiya Salamatu; Vice President of the Commission; the Ghanian Chief of Defence Staff and principal staff officers from Defence, Army, Navy, and Air Force headquarters.

Sources said the meeting which was reportedly held at the Defence Headquarters, in Abuja, was part of the preparation for the inauguration of an ECOWAS Military Intervention Group, ECOMIG, expected to move ahead of the United Nations troops to be deplored after January 19 if President Jammeh fails to step down from power to Barrow, who reportedly won the election from an opposition party.

How foods good for pregnant women could still be harmful