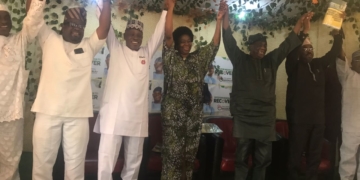 Gbolarumi: Atiku’ll win 2023 election with or without G5 governors

Gbolarumi: Atiku’ll win 2023 election with or without G5 governors 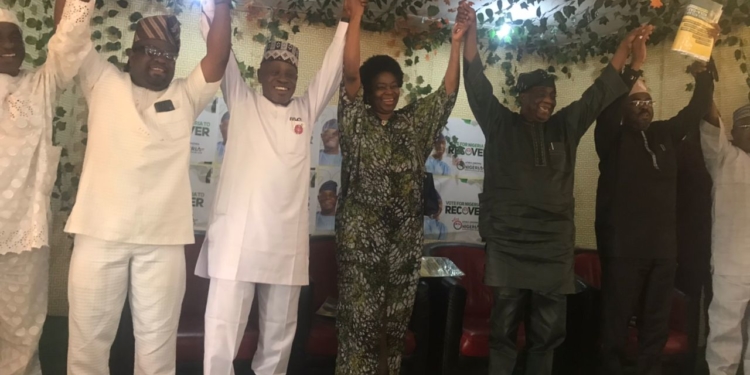 Gbolarumi spoke at press conference organised by the Oyo State chapter of the National Mandate Group (NMG), a group within PDP across the country working for the victory of Atiku, held at NUJ Press Centre, Iyaganku, Ibadan, on Tuesday.

Recall that some PDP governors, under the G5 banner have been at loggerheads with the party’s leadership over the failure of the party’s national chairman to step down.

The five aggrieved governors– Nyesom Wike(Rivers), Seyi Makinde(Oyo), Samuel Ortom(Benue), Okezie Ikpeazu(Abia) and Ifeanyi Ugwuanyi (Enugu)–  have been criticising Atiku and calling for the resignation of Senator Iyorchia Ayu as PDP National Chairman for “equity and fairness.” They insisted that the party’s presidential candidate and national chairman can’t be from the same zone.

But Gbolarumi said Atiku is the man to beat in the presidential elections, adding that the aggrieved governors won’t engage in anti-party activities.

“I believe Seyi Makinde won’t come out to say he is voting for another candidate. That will be anti-party. Nobody can come out to do that and I strongly believe they will not. But let’s wait and see what happens on Thursday,” he said.

He expressed confidence that all the PDP candidates in the 2023 elections would be voted for.

Speaking, former Minister of State for Federal Capital Territory, Oloye Jumoke Akinjide, said presidency is not for an apprentice.

She said Atiku is the only candidate, out of all the presidential candidates, with  the experience and competence to rebuild Nigeria from the ruins of the ruling All Progressives Congress.

“Anybody that says ’emilokan’ should be dismissed. We believe Atiku Abubakar is the man God has prepared for a time like this. He is going to give Yorubas what they have been clamouring for in the last 30 years. He is going to restructure this country and he’s been saying it since 2004. He has shown himself to be a democrat and compassionate leader to Christians unlike someone that has jettisoned the interest on Yorubas because  of his personal ambition and who can’t find a worthy Christian as running mate,” she said.

The former minister also said Oyo State  Governor, Seyi Makinde, has told them to work for PDP candidates in the 2023 general elections from top to bottom.

“The quarrel we have in PDP is because we are the government coming on. Everyone wants to be at the table but it would be sorted out,” she added.

On the activities lined up for  Atiku’s campaign activities in Oyo State, former Minister of Special Duties and spokesperson of the NMG, Elder Wole Oyelese, disclosed that members of PDP in the state and beyond are embarking on a march in support of the party’s flagbearer on Wednesday, January 4, 2023.

He said the march will take off at Total Garden area of Ibadan by 8am, and  the procession will move to Mapo Hall where prominent members of the party will give speeches and justify to members of the public why they should vote for Atiku on February 25, 2023 presidential election.

“As you all know, PDP is the strongest and the most popular party in Oyo State and indeed Nigeria and we have no doubt that our party will sweep all the elective positions in the forthcoming 2023 general elections. Atiku Abubakar won in Oyo State in the 2019 presidential election polling 366,690 votes to defeat the All Progressive Congress’ candidate, President Muhammadu Buhari, who scored 365,229 votes and he will win it again next month with a wider margin.

“Since the return of democracy in 1999, Nigerians can now see the difference between the PDP government and the APC government. During the Obasanjo and Jonathan years when PDP was in power at the centre, the Nigerian economy was much better than what it is now Nigerians never had to suffer like this. Now that Nigerians have experienced the APC government and what they got was unimaginable suffering, the difference is clear. Our people are going to bed hungry every night and they still have to sleep with only one eye closed because of insecurity as bandits, terrorists and common criminals prowl the land in search of victims. Prices of goods and services have sky-rocketed and become unaffordable for majority of our people. The Buhari administration has piled up debt. The infrastructural deficit can be seen in the absence of the most basic amenities. Most of our people are unemployed. Young Nigerians have no choice but to dabble into cybercrime known as yahoo yahoo, while others are fleeing Nigeria in droves. We are virtually in a hopeless situation Another four years of APC will throw Nigeria into the Stone Age.

“But there is hope. Atiku Abubakar will rescue Nigeria from bondage and suffering. He is tried, tested and the most experienced among the leading presidential candidates. He will hit the ground running from day one as president because Nigeria is experiencing a harrowing socio-economic situation and does not need an apprentice president. Atiku Abubakar is a detribalised pan-Nigerian, a bridge builder with longstanding friends and associates in every nook and cranny of Nigeria who is acceptable to all ethnic groups and religious bodies in Nigeria,” he said.

Oyelese added that the PDP candidate has the best ideas on how to rescue Nigeria from the years of ruin and damage caused by APC.