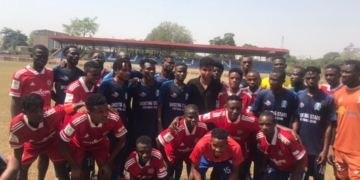 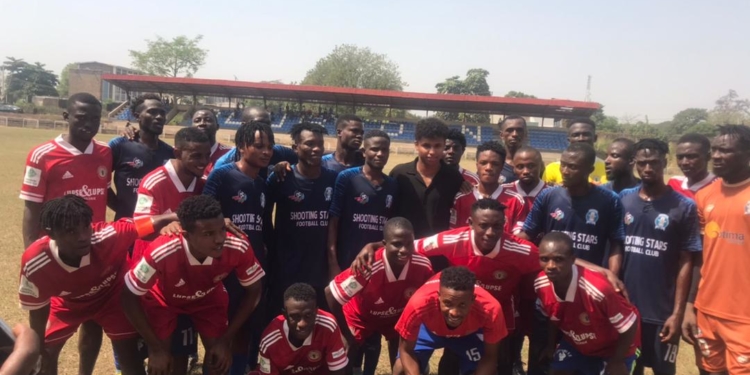 German professional footballer, Karim Adeyemi, was at the Olubadan Stadium, Ibadan, to watch his team, Adeyemi FC, play Shooting Stars in an exhibition match, on Monday.

The 20-year-old Borussia Dortmund forward is on a private visit to Ibadan, his place of origin, and decided to watch the exhibition game organised by his Foundation, Karim Adeyemi Foundation.

Speaking with newmen at the stadium, the Chief Operating Officer of Karim Adeyemi Foundation, Mr Olaolu Adedayo, described the footballer as an “Omoluabi.”

He said the Karim Adeyemi Foundation was created to put smiles on the faces of the downtrodden and people without opportunities in the society.

“We have three areas of intenvention- football, education and general environment. What we have here today is the football aspect of what we are trying to do. We have football club, Adeyemi FC, that is professionally registered with Oyo FA and NFF.

According to Adedayo, the  Foundation is looking to collaborate with stakeholders on the three “specific interventions that we are doing.”

“We want to collaborate; Karim is here today, I don’t know his expectations but he is seeing it first hand, the players, what they lack, what can make them better and through the Foundation, we will do intervention,” he said.

Adedayo disclosed that the  Foundation was registered three years ago, but it is going to be formally launched next year.

His words: “We are doing the basics, construction. We want to get that in place before we start our intervention. But before now, if you are familiar with Karim as a person or his dad or his family, they have been doing a lot of charity informally before now and they have continued to do it. But now, we want to make it more formal, documented and reach out to more people.”

He said PTTI has a few focal areas, which include civic engagement, envrionmental awareness, supporting government’s educational endeavour and supporting other foundations like Karim Adeyemi Foundation

“Karim Adeyemi Foundation has one of its projects has a football team. But they also have charity aspect of it, which is a part of what we are coming here to support, trying to reach out to other people. They are doing football today as a form of novelty match. They have also partnered with us and actually given us funds to execute some of our project before. That’s how we are tied to Karim Adeyemi Foundation. We help to spread the good work they do,” he said.

Idowu, who noted that some of the things PTTI has done are very visible, said: “If you get to Sango, that junction that goes down to Bodija when coming from Mokola, you will see a traffic stand there we were talked about so many issues; stop female genital mutilation, about aligning with positive values and positive people. That is just one. For our last independence anniversary, we actually went round to places giving national flags and national symbols  to make sure people understand patriotism about Nigeria.”

The PTTI president said the group always try to support whatever it is that  can make the society better whether education, civic engagement or just natural incidents.

“We just try to make sure we are around and support things that are positive,” he added.

Adeyemi is a 20-year-old German footballer, with Nigerian and Romanian origin. His dad is From Ibadan, Oyo State, while his mum is from Romania. Karim was born in Germany and was at the last world cup with the German squad. This is the second time he will be visiting Ibadan.