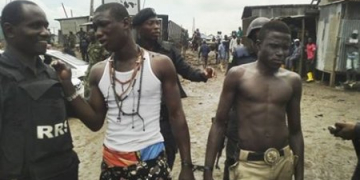 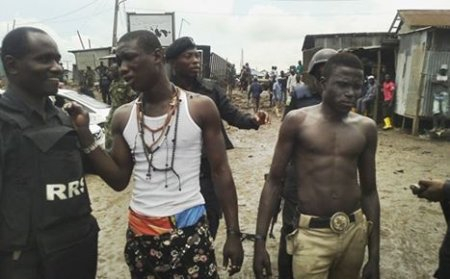 Hausa and Fulani traders clashed at the Lagos State Abattoir, Agege on Wednesday. No fewer than three persons were killed, while more than 20 people reportedly sustained varying degrees of injury and were rushed to different hospitals in the area.

Punch reports  that the two groups started having issues after the Nigeria Railway Corporation demolished some shanties and shops erected around the railway line.

The structures were reportedly owned by the Hausa, who were majorly scrap collectors.

They were said to have accused the Fulani, who were cattle dealers of being responsible for their ordeal, adding that the Fulani encouraged the government to demolish the structures to facilitate easy rail transport of their cows from the north to the abattoir.

A trader, Jimoh Umoru, said crisis erupted after a Hausa woman was assaulted by a Fulani man, who had bought food from her and refused to pay.

He said, “The Hausa are majorly scrap collectors, and they ply their trade around the railway line where they also built their shanties.

“On Saturday, the government demolished their shanties and shops and many of them were displaced and lost their means of livelihood. They felt that their Fulani brothers, who deal in cattle, were behind what happened to them.

“The matter came to a head on Tuesday after a Fulani man bought food from a Hausa woman, and refused to pay. There was argument between them and the man assaulted the girl. That was how the two tribes started fighting each other.

“Around 1am on Wednesday, some of the Fulani youths invaded the apartments of the Hausa and killed some of them.

“By 5am, the Hausa launched a reprisal and injured many of the Fulani and destroyed their property. The Hausa suffered higher casualties.”

Our correspondent was told that some of the victims were taken to the New Merit Hospitals in the Oko-Oba area of Agege.

A trader, who did not identify himself, blamed the cattle dealers for the mayhem, saying they were intolerant of other traders.

“The Fulani in the market are not tolerant. Any little disagreement, they would start threatening mayhem. The government should be proactive because the Hausa have vowed to avenge their slain brothers. The battle is always at night when people have gone to bed. We are not safe,” he added.

When PUNCH Metro approached the Hausa group in the market, they declined comment.

“We lost three of our people. We won’t say more than that. At the right time, we will call the press,” one of them, who did not identify himself, said.

Jikantoro explained that the grouse of the Hausa people was that the Seriki Fulani refused to fight for them when their structures were demolished.

He said, “Last week, the NRC demolished structures where the scrap dealers do their business. The scrap dealers came to complain to the Seriki Fulani and he told them to comply with the government’s directive. He said after the demolition, the little space left should be managed. They left disappointed because they were expecting him to order them to start fighting.

“Today (Wednesday), around 2am, they attacked the cattle dealers to protest against what the government did to them. They entered into the market, burgled some of our shops and beat up people who were sleeping. We didn’t lose anybody, but 20 of our traders were seriously injured.

“Six vehicles, one belonging to the chairman of the cattle dealers, and five others belonging to the Seriki Fulani, were vandalised. Seven of our cattle died as a result of this clash and we have decided that we are not selling cattle today to protest against this havoc.”

Jikantoro said his group gathered that the Hausa were planning to attack them and had started recruiting gangs from the Mile 12 and Ojota areas of Lagos State.

The Galadima Yamma of the Abattoir Market, Alhaji Umar Adam, said he met the police presence by the time he arrived at the market.

“There was a misunderstanding between some Fulani men and the scrap dealers and truck pushers operating in the railway line.

“The issue was not properly handled and it escalated. But with the intervention of the police, calm has been restored.

“The major cause of all this was the demolition carried out on the railway line,” he added.

When PUNCH Metro visited the New Merit Hospitals where some of the victims were reportedly taken to, he was told that two people were brought into the hospital.

The medical director was said to be unavailable, but a nurse, who spoke on condition of anonymity, said, “The two people had cuts in their head and hand.”

She said, “At about 1am today, we received a distress call that there was a serious fight between the Hausa and the Fulani communities in the Abattoir.

“The report indicated that the crisis started after a young Hausa woman was beaten by a Fulani man.

“It degenerated into serious fight and subsequent destruction of property.

“The command’s operatives from Area G, RRS and Abattoir division were moved in to quell the crisis and normalcy has been returned to the area.”

She said the state Commissioner of Police, Fatai Owoseni, had ordered a peace parley between the two groups, adding that the police arrested four suspects.