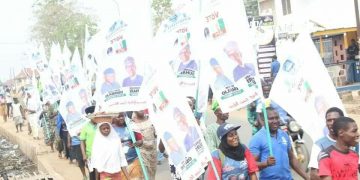 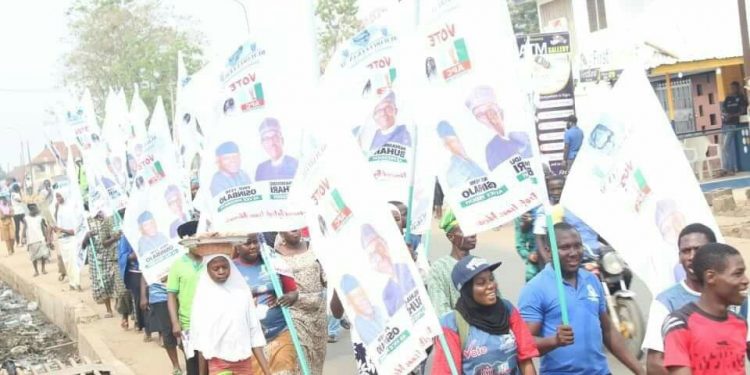 The ancient town of Iwo in Osun State bubbled on Saturday as Minister of Health, Professor Isaac Adewole took his strategic campaign in support of the reelection bid of President Muhammadu Buhari.

The campaign initiative tagged “Buhari Leekansi” is the brainchild of the former University of Ibadan Vice Chancellor. It is geared towards propagating the achievements of Buhari and Osinbajo administration since 2015, and to complement the All Progressives Congress (APC) campaign structure in selected states of Osun, Oyo, Ondo and Ekiti in the South West.

The Buhari Leekansi ambassadors took time to convince electorates on the need to return the duo of Buhari and his deputy, Vice President Yemi Osinbajo, to office in the February 16 election saying it would ensure the continuation of the administratio’s good and lofty ideas that will propel the country into prosperity and economic advancement.

Speaking to journalists, the director of media and publicity of the initiative, Samson Owoyokun lauded President Buhari for the critical interventions he has made to redeem Nigeria’s image, his achievements in the health, agriculture, power, road and railway sectors as well as his courage in the fight against corruption and insecurity in the country.

His words: “Iwo is strategic in the political scheme of Osun, and our party APC didn’t do very well here in the last election, so this is a strategic intervention to boost the chances of the party, and enlighten electorates on voters education to reduce drastically voided votes in the coming election as against the 49,000 cancelled votes in the September 22nd gubernatorial election. We are taking this campaign to other major towns in Osun and will be held in Oyo, Ondo & Ekiti states too, Owoyokun emphasized.

The APC chairman in Iwo, Alhaji Gafar Adeniyi Atanda who led other chieftains of the party to join the rally equally praised the initiator of the enlightenment rally for his contribution towards the stability of the party, delighting that Iwo people are direct beneficiaries of the government’s policies in trader moni, market money and N-power programme.

“We can see the huge investment in road and power infrastructure everywhere we travel to within Nigeria,” he said.

Residents of the town trooped out to welcome the Buhari Leekansi ambassadors, among who were Mrs Kafayat Ibrahim and Alhaji Gbade Mustapha, who promised to mobilize votes for Buhari and APC candidates in the zone.