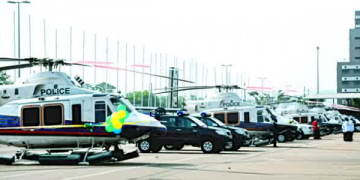 To boost security in Enugu State, the police on Sunday, began aerial surveillance of the entire state.

Monarch arraigned for perjury in Enugu

The spokesman of the police in the state, Mr Ebere Amaraizu, told the News Agency of Nigeria (NAN) in Enugu that the helicopters were on an aerial monitoring exercise of the three senatorial zones.

“As part of measures to ensure that the entire state is safe and secure, the state command, through the Air-Wing of the Nigeria Police Force, has begun an aerial surveillance of the three senatorial zones.

Amaraizu, a Superintendent of Police, noted that the Enugu Commissioner of Police, Mr Emmanuel Ojukwu, had earlier advised members of the public not to panic on sighting the helicopters.

“It is the gesture of the Inspector-General of Police and government to ensure that the entire area is made safe.

“The command has mobilised security operatives, working in partnership with relevant stakeholders and police pilots, with a view to flushing out criminals from their hideouts in the state”

The state command currently has three helicopters and a heliport at its disposal in Enugu.