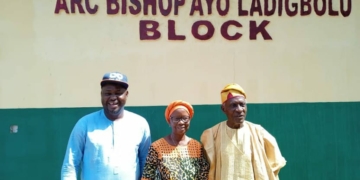 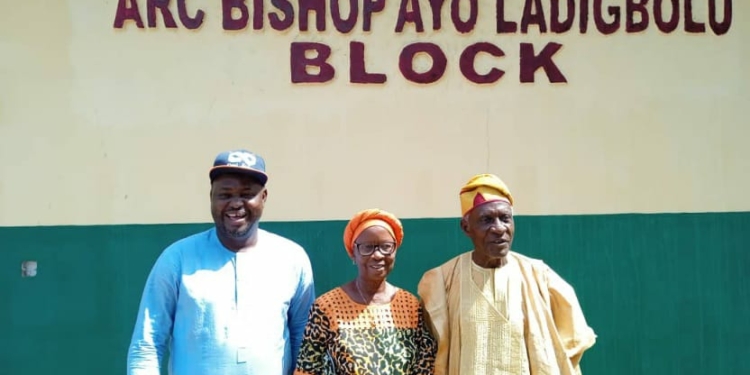 Why next Alaafin will inherit Oba Adeyemi’s wives –Archbishop Ladigbolu

Christianity can’t separate me from my culture-Archbishop

A block of three classrooms named after an illustrious son of Oyo town and Chairman of Yoruba Unity Forum, Archbishop Emeritus Ayo Ladigbolu, has been commissioned at Durbar Grammar School.

The project, which was inaugurated on Monday by Ladigbolu alongside his wife, Afolake, was facilitated by the lawmaker representing Afijio/Oyo East/Oyo West/ Atiba Federal Constituency in the House of Representatives, Hon. Akeem Adeyemi, aka Skimeh.

Speaking at the event, Hon Adeyemi said the decision to name the block of classrooms after Ladigbolu, was due to his tremendous contributions and his undiluted love for Oyo town.

“You cannot be more Catholic than the Pope. Let it be on record that there is no other person anywhere today, with the exception of late Alaafin Lamidi Adeyemi, who had done more for Oyo town than the person we’re celebrating today, Archbishop (Prince) Ayo Ladigbolu. This is a man who is living and breathing Oyo. There’s no single major development in Oyo, which does not bear his signature in one way or another,” Adeyemi said.

The lawmaker explained that he does not subscribe to celebrating great men in death, hence, his decision to celebrate Ladigbolu in his lifetime by naming the project in his honour.

In his remarks, Ladigbolu said it was a heartwarming coincidence that it is in his alma mater that a project has been named in his honour, having attended Durbar Modern School, which metamorphosed into Durbar Grammar School.

He described Adeyemi as a worthy representative of Oyo and someone who has endeared himself to both young and old through his numerous developmental projects in the four local government areas making up Oyo Federal Constituency.

“Prince Akeem Adeyemi has represented us well. I can count not less than 111 projects that I have personally joined him to inaugurate in the last eight years. He does not need to campaign from house to house to solicit for votes. There is no single household in Oyo where his impact is not felt today,” Ladigbolu said.

Meanwhile, a non-governmental organisation, Oyo Metro Suicide Prevention and Counselling Initiative, formed by Ladigbolu, will on Tuesday, December 13, hold a day training on suicide prevention for over 1,200 volunteer counsellors at Ilora Grammar School.