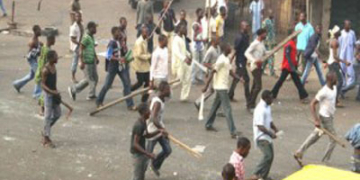 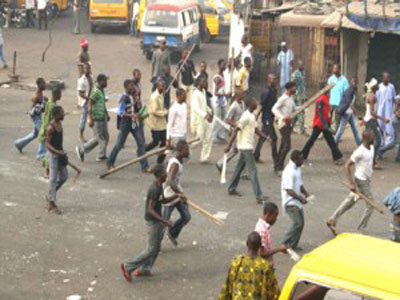 A bloody clash of hoodlums occured at Sasa, area of Ojoo , Ibadan in the early hours of Friday, leaving up to nine people injured as well as destruction of properties.

Reports said trouble started when hoodlums stormed the area to avenge an alleged maltreatment of their peers. They reportedly attacked residents and shop owners.

As the clash ensued, rumpurs spread across the city that it was a clash between Hausa and Yoruba traders.

But in statement titled, “False alarm on alleged conflict between Hausas and Yorubas at Sasa Market, Ojoo, Ibadan” the Oyo state Police Command , debunked the rumour following an on-the-spot assessment by the Commissioner of Police in the state, Mr Shina Olukolu and his Deputy, in charge of Operations, Mr Kehinde Alonge.

The police confirmed that nine persons were seriously injured in the violence.

The CP assured that peace and normalcy had been restored in the area, and urged members of the public to disregard the rumour that there was fight between the two ethnic groups.

According to him, three persons had been arrested and charged to court when the incident first occurred two days ago, before the social miscreants went to regroup overnight for another attack on the market, which subsequently escalated on Friday.

He warned miscreants, and mischief makers who are bent on disturbing the peace of te state to desist or face the full weight of the law.