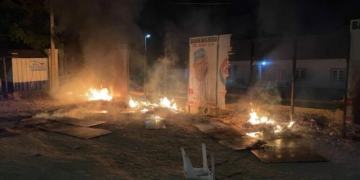 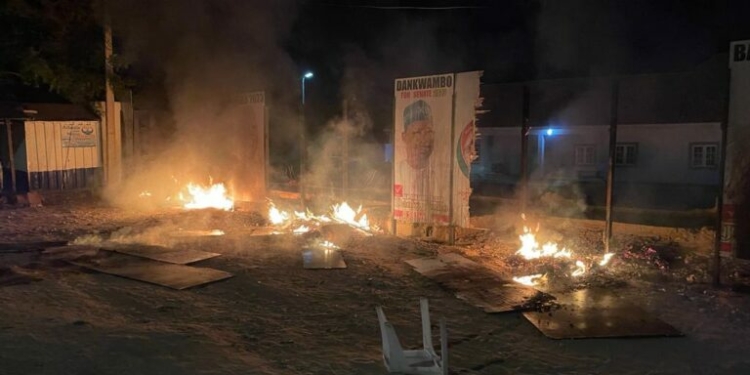 The campaign office of the Peoples Democratic Party (PDP) governorship candidate in Gombe State, Mohammed Barde, has been set ablaze by suspected hoodlums.

The campaign office, close to the Presidential Lodge of the Gombe State Government House was reportedly set ablaze by political thugs in the early hours of Monday.

Details of the attack were still sketchy, but the PDP has blamed the incident on the ruling All Progressives Congress (APC).

“There was an attack on the building housing the Barde Campaign Organisation in the early hours of today by political thugs, suspected to be that of the sinking APC, setting ablaze the building and destroying properties.

“The cowardly attack on this edifice, one of many in the last months further affirmed the present governments stand on violence and destruction, a threat to the fragile peace of the state, which must vehemently be rejected by all and sundry.

“The PDP governorship candidate, Alh Muhammad Jibrin Barde has on different occasions rejected violence and political thuggery, stressing the need to engage the resourceful Gombe youth in a meaningful pursuit.

“The good people of Gombe State are hereby prompted to reject this act of oppression on the ballot come 2023. The Barde Agenda rests on securing the lives and properties of the people, equal opportunities for the youth and women, rapid infrastructural development and providing a level playing ground for the opposition devoid of any undue oppression,” he said.

Misilli said the opposition was in no way a threat to APC, wondering how the governor could have given such order as alleged by Barde.

“There’s no any reason that the governor or any critical stakeholder in APC would instruct someone to attack the PDP campaign office. PDP is not in any way a threat to the APC because the party has consolidated its hold in the state.

“The governor is a law-abiding citizen, and he can not instruct or allow someone to break law and order in the state. The PDP is just looking for a way to get cheap publicity and sympathy by torching its campaign office and blaming it on the government.

“APC has no reason to do that when we are 100% sure of a landslide victory in the forthcoming election,” he said.

The Gombe State Police Public Relations Officer, ASP Mahid Mu’azu Abubakar, also confirmed the incident in a statement, adding that investigation has been launched and moves were being made to arrest the perpetrators.

Despite the Peace Accord signed by political parties in the state, there has been an increase in violence in the buildup to the 2023 elections.