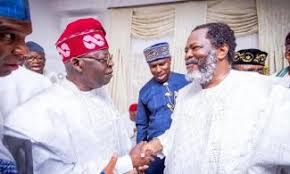 Media stakeholders in Nigeria, on Sunday, brokered peace between the media directorate of the All Progressives Congress Presidential Campaign Council (APC PCC) and Arise Television, two parties that recently engaged in war of words in the media.

A statement signed by Yusuf, Isah and Isiguzo, which was made available to newsmen on Thursday, said that Arise TV was represented by its chairman, Nduka Obaigbena; Managing Director of This Day Newspapers, Eniola Bello, and the Group Executive Director, This Day Ombudsman, Kayode Komolafe.

“On the other side were Mr Dele Alake, Director of Strategic Communications of the APC Presidential Campaign Council; and Mr Olawale Edun, a member of the presidential campaign council/Chairman of The Nation Newspapers.

“Also present at the meeting which was held at the residence of Chief Osoba was Mr Gbenga Adefaye, General Manager/Editor-in-Chief of Vanguard Newspapers/acting Provost of the Nigerian Institute of Journalism (NIJ),” the statement said.

Arise TV and This Day newspaper on one side and the APC PCC have been at loggerheads after the campaign council in a joint statement by Dele Alake and Bayo Onanuga, verbally attacked Obaigbena over the editorial published by the media organisations’ boards of editors.

Arise TV and ThisDay Newspaper had accused Tinubu of dodging their interview requests.

But the PCC in the statement accused Obaigbena and the media platforms of corruption and lacking the moral rights to moderate public discourse.

The media stakeholders in a statement titled, “Stop the Embellishment,” said parties had agreed to sheath their swords.

“The meeting was at the instance of the Nigeria Press Organisation (NPO).

“The meeting resolved that considering the fellowship among us and overall interest of press freedom in the country, the disagreement between the two parties should be settled amicably and without any preconditions.

“In the spirit of this gentlemanly agreement, the meeting decided that it was not necessary to issue a public statement,” the stakeholders said.

The statement, however, said the meeting rescinded its stand when news reports began to appear that misrepresented what happened.

“We wish to draw the attention of our friends in the media and the public at large that the main parties in this dispute  have agreed to let bygone be bygone and that any embellishment on the outcome of the meeting represents the figment of some people’s imagination,” it added.