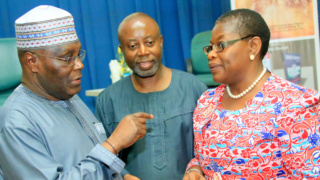 Share on FacebookShare on TwitterShare on WhatsAppShare on Telegram
Former Vice-President Atiku Abubakar on Tuesday said that if he had emerged President in 2007, he would have sold part of the Nigeria National Petroleum Corporation (NNPC) for the sake of developng the Niger Delta.
According to him, except the Niger Delta crisis was resolved, the country may not enjoy stable electricity supply.
Atiku spoke in Abuja at the launch of a book titled: “We Are All Biafrans,” written by Chido Onumah. The former VP was chairman of the occassion.
His words:

“I think the Niger Delta should be handled with a stick and carrot approach. In 2007, before I ran for president, I met with various stakeholders on the Niger Delta issue and they came up with a policy.

“Part of the recommendations was that the ministry be moved to the Niger Delta and not Abuja. We have had administrations that did not do their homework on the Niger Delta.

“If I had won, I would have sold 10 per cent shares in the NNPC; that will give me $20 billion, which would build infrastructure for the Niger Delta, but we will always end up with accidental leadership.

“Bring peace and development to the Niger Delta then they will stop blowing up pipelines. Then, we will get gas and then power can be stable, but until then, we will not get it.”

The APC chieftain also urged Nigerians to give President Muhammadu Buhari a “pass mark” for his efforts in the first year of his administration.
Atiku said that of the five areas the Buhari administration pledged to face, he has accomplished two and should be encouraged.
He said:

“He promised to look into issues like power, insurgency, unemployment, corruption and diversification and if you are to take two out of five, you can give him a pass mark.
“He has dealt with corruption and with Boko Haram.
“For power, give him time.”

Atiku also recommended “a smaller, leaner Federal Government with reduced responsibilities” to tackle the myrad of threats to the Nigerian State.
He said:

“State and local governments should control education, health, agriculture, roads and other infrastructure.
“A true federal system will allow the federating states to keep their resources while the Federal Government retains the power of taxation and regulatory authority over standards.
“The result will be a political and governmental system that empowers local authorities and gives them greater autonomy to address peculiar local issues, while enhancing accountability and contributing to the general good of the country.

“Such a robust federal system will reduce the tensions that are built into our current over-centralized system.”

Other recommendations from Atiku were: Autonomy for states; a tax-centred revenue base; enhanced, diversified economic activities and productivity in order to enlarge their tax bases.
He also proposed an end to the indigene-settler dichotomy, the creation of a state police to complement the federal police and help in the fight against crime.
He called for a restructuring of the country, saying:

“Nigeria is not working as well as it should and part of the reason is the way we have structured our country and governance, especially since the late 1960s.
“The Federal Government is too big and too powerful relative to the federating states. That situation needs to change and calling for that change is patriotic.

“We must refrain from the habit of assuming that anyone calling for the restructuring of our federation is working for the break-up of the country.

“An excessively powerful centre does not equate with national unity. If anything, it has made our unity more fragile, our government more unstable and our country more unsafe.”

The author of the book said he believes in true federalism and that the 214-page would sensitise the reader to note that most, if not all, of the problems of Nigeria were located in the way the country was structured.
A journalist, blogger and human rights activist, Onumah called for a look at the socio-political restructuring of Nigeria to ward off “a looming catastrophe that could endanger our collective well-being”.

PDP united, only part of it not functioning well, says ex-spokesperson

Atiku takes 2023 presidential campaign to US