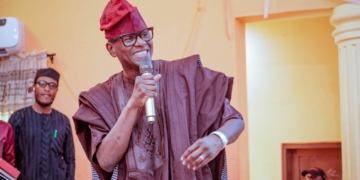 The Accord senatorial candidate for Oyo South, Mr. Kolapo Kola-Daisi, has made a case for tertiary institutions to embrace alternative funding to solve the perennial issue of funding higher education in Nigeria.

Kola-Daisi stated this while delivering a paper, titled: “Funding for the development of our tertiary institutions: How else can we do it?” at the Non-Academic Staff Union of Educational and Associated Institutions (NASU) week of The Polytechnic, Ibadan, where he was invited as the Guest of Honour.

The senatorial candidate, with 23 years experience in raising funds for both small and large scale businesses, highlighted 10 viable alternative sources of funding that tertiary institutions must seriously consider in order to thrive without depending solely on government funding.

“It suffices to say that government funding and dependence on tuition alone cannot successfully bear the vision and goals our tertiary institutions are set up for. I mean, this is pretty clear that the government has found it increasingly difficult to fund education as its annual budgetary allocation has not even matched the quality of higher education recommended by UNESCO or the quality our young people deserve.

“The solution of alternative funding is a thing and can be wholly successful. By some estimates, Harvard receives an average of $3 million a day. Oxford and Cambridge have conducted successful £1 billion campaigns. Stanford has an endowment of more than $20 billion and received four gifts of at least $100 million in 2015 alone,” he said.

Kola-Daisi listed the setting up of vibrant endowment fund, setting up potential companies through research and development efforts, seeking global partnerships by raising globally-relevant solutions, and establishing partnerships with companies for direct funding through Corporate Social Responsibility as some of the ways to seek alternative funding for higher education.

He also highlighted showcasing impact to attract foreign grants, blocking of leakages and preventing wastage, and pursing the possibility of mergers as complementary alternatives.

“I am strongly convinced that alternative funding for our schools must be fully adopted and taken up. Tertiary institutions need to become professional and successful in attracting donors, stewarding them, and running fundraising campaigns. If they are diligently researched, administered, and maintained, they will guarantee a steady stream of funding for our schools,” the Accord candidate said.

The chartered banker and accountant was praised for the noble solutions he proffered to solve the funding crisis in the education sector.

He was also honoured with an award of recognition for his efforts towards the welfare of NASU members.