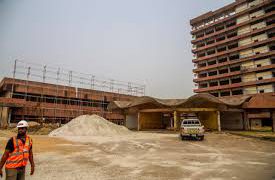 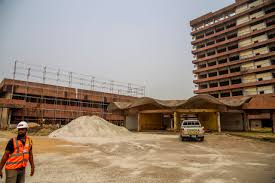 The Chief Executive Officer of Whitestone Global Investment Limited, Arc. Woleola Adebowale Oluwole, has narrated how the contract for the remodeling and reconstruction of Agbowo shopping complex was allegedly terminated by Otunba Seye Famojuro, an ally of Oyo State Governor, ‘Seyi Makinde.

In an interview on Ibadan-based radio station, Fresh 105.9FM, on Monday, Woleola said his company has been evicted from the site of the project, adding that a “fraudulent contractor” his organisation brought in as “financier” is the one working on site now.

Excerpts from the interview:

Who am I speaking with this morning? My name is Woleola Adebowale Oluwole, I’m an Architect and CEO of Whitestone Global Investment Ltd.
We were given the mandate to reconstruct Agbowo shopping complex by Oyo State Investment Public and Partnership Agency.

There was a breaking news this morning by a popular blogger, Naija Today that you have been evicted from the place
Yes, we were evicted. It is correct.

You sent me some documents just now and you want to confirm to me the true representation of what is playing out as we speak
That’s correct.

Give us a background of how you are officially mandated to renovate the place and why as we speak this morning, you are no longer in charge
In August 2019, there was an advert in the newspapers concerning interested parties on vie for the remodeling and reconstruction of Agbowo shopping complex. This has been a dream of ours for some time and as a background we have presented for this project under the previous administrations, going to about 12 years now since we have been presenting our team for this.
Eventually, the process was done in a very fair way, otherwise people like us would never have been able to get to such a place. There were about four different presentations and many arms of government were there. Eventually, we were awarded and given the mandate to renovate and remodel Agbowo shopping complex. Our proposal was favoured above other people’s proposal.
Now, we have three offers for financing the project because we are just basically technocrats. No matter what you do, a project of that size- talking about N5 billio- nobody can pull money from his own pocket to finance that kind of project. We need financiers, group of investors or a bank so we approached Jaiz Bank. We have been having talk with Jaiz Bank with another financer called the Oak, we did a lot of work together in Lagos and we have another financier that came on board vying for our attention, they are called Connect Multi Plus.
On the mandate we got, there were two conditions- the first condition was move into the site within seven weeks and the second condition was pay N 2million monitoring fees within 14 weeks. When we presented this across board, Jaiz being a bank, we knew it will take some time to complete the process and the other financier, Oak property, said they could not move in within seven weeks because there was no how they could do that, they need a little more time but this was an expedient project because it is a state project. We then got another financer Connect Multi Plus.
We had discussion and during the discussion we offered to do the project. Being the financier, we said it will allow them reduce the cost by having full control of the project but of course with our oversight because both the business and structural concept are ours. We have the team working on it from different professions, professionals, which was one of the reasons we were confirmed to be fit for the project. We know the contract so long as we had the oversight and we signed an agreement with them.
There are two tests in the agreement, the first test was to bring the bank guarantee and the second test was we removed a part of that project from their purview which has to do with the landscaping, the insurance and several other things, especially external works generally and lightening because those one had a very strong political interest for us because we wanted to do some things in the community too like street lighting and drainage of the community. We did that and we went on, the flag on of the ceremony was the first part of what they are supposed to finance and they did to a certain extent.
When we flagged off on the 23rd of September, work started and the first part of the work that started was the stripping of the old assets there and suddenly I was called that Police had come to arrest some people there. I went to the Police station, they explained to me that they were stealing there and I said no they were not stealing, they were stripping the place. All this while, I did not know that our so-called financier and contractors had sold all those assets to somebody. That went and I explained to the people there, the old tenants and housing corporation that this is what we are doing-strip and pile and come and take inventory.
When we discovered that, we knew that these people were fraudulent. Whereas when we started, t due diligence on them has been going on and by the time they started that, the due diligence report came back that they were actually serial fraudsters.

What did you do and what stopped you from correcting the situation?
We took them to court and started the court proceedings. Shortly after that, I was summoned to a particular office in Oyo State after I have terminated the agreement of the contractor, and I met the contractor there. I met the officer there and somebody that was introduced to me as Otuba Seye Famojuro. I have never met him before and I was told there to go and mediate with the contractor, somebody that does not have money. To cut the long story short I refused and said I can’t work with him because it is our reputation that is at stake. I said all of you people that are telling us to go and work with him, at the end of the day when things get wrong, it is our name that will be at the forefront.

Will you confirm on the flag off day that the governor symbolically handed the key of the place over to you?
Yes, he handed the key over to me and I gave a short speech on that day commending the way the process was done.

Your attempt to evict the people you brought and are busy pillaging the assets they were supposed to rebuild, how has that been rebuffed and who is rebuffing it?
Eventually, we had several meetings and Otunba Seye Famojuro insisted that we should work with them and we said we are not working with them. So,a day to the court hearing where we are expecting the court to tell them that they should cease and desist and give them injunction, the mandate was revoked.

Who revoked the mandate?
The agency that gave us the contract, OYSIPA.

Was it the same agency that gave you the mandate and approval?
Yes.

What was the reason they gave you for terminating the mandate?
They said verifiable infringement and the two conditions that are on the mandate letter prior to the waiting for the contract to be ready which we have already paid for, we know them. The only two conditions on the mandate are pay N2 million and move to the site.
I agree we made a mistake but we were not given a chance to correct it.

Have you gotten back to Governor Makinde as regards this development and what has he been saying to you?
Yes, we did. We actually had a meeting with him and what he told us was that those guys have spent some money and that he doesn’t want any type of court case. That we should mediate with them, pay them off and continue handling our project the way we deem fit. Only that we should meet the timeline that we proposed to him. And we said this is why we are so urgent about it, these people have to go, so that we can meet the timeline.

Since the governor has given you his word concerning that, what is stopping you and the other affected party from consummating what has been suggested by the governor?
We tried to contact OYSIPA and the Director-General to broker a meeting between us and those people since they know them. We didn’t introduce those people to them as our contractors. We don’t know how they know them. Now, since you know them, call the two of us together and le us do what the governor said but they were not available. We wrote letters to them, we wrote letters to those people, they were avoiding us. Apparently, because they now have some political clout. That was why they were avoiding us.

Have you tried to move into the complex without being allowed?
Yes!!! My car was impounded for about 10 days. None of us could move in; two truckloads of Operation Burst were used to evict us on November 11, that was long before the mandate was revoked. Before the mandate was revoked, we could not even move to the site. November 11, around 3/4pm, I wasn’t there, I was told Otunba Seye came with two Hilux loaded with Operation Burst. I eventually sent a petition to the Garrison Commander about this issue that my vehicle was there and I said my life was being threatened.

You keep mentioning Otunba Seye, in what capacity was he relating with you?
Sorry, I don’t too. All I know is that I saw him for the first time when I was invited to OYSTIPA office. All the time the process was going on, I never saw him. I saw him for the first time in that unofficial meeting and from then on, I think everything was on his parade.

Who is working in that place now?
It is the same mediocre people that are working there.