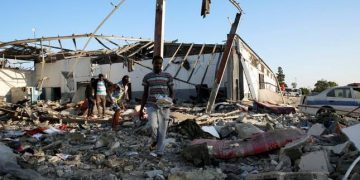 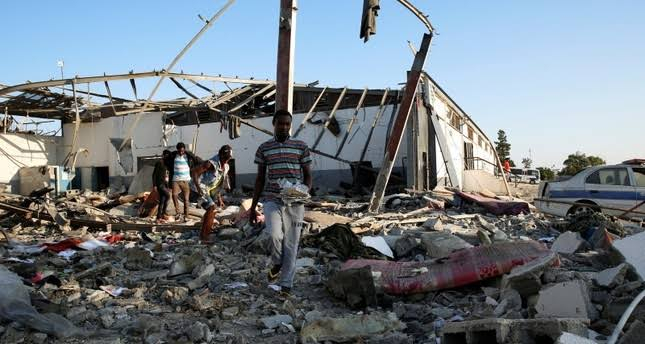 “The appalling toll in injuries and lives from Tuesday night’s attack east of Tripoli at the Tajoura Detention Centre speaks to the deep concerns, expressed repeatedly¸ by the International Organization for Migration (IOM) and UNHCR, the UN Refugee Agency, over the safety of people in detention centres”

Those were the words of the IOM and the UNHCR in a press release on Wednesday, following the killing of at least 44 people, mainly African migrants, in an airstrike that hit a suburb of the Libyan capital Tripoli. The United Nations said more than 130 people were wounded.

It was the highest publicly reported toll from an air strike or shelling since eastern forces under Khalifa Haftar launched a ground and aerial offensive three months ago to take Tripoli, the base of Libya’s internationally recognized government.

Thousands of African migrants trying to reach Italy by boat are held in government-run detention centers in what human rights groups and the United Nations say are often inhuman conditions.

According to the IOM, “this latest violence also speaks to the danger both IOM and UNHCR have warned over returning migrants and refugees to Libya after their interception or rescue on the Mediterranean Sea.”

The two organisations called on the broader UN System to condemn this attack and end the use of detention in Libya. They also call on the international community “to provide humanitarian corridors for migrants and refugees to be evacuated out of Libya.”.

Calling for a thorough investigation into the airstrike, they maintained that the coordinates of detention centres in Tripoli are well known to combatants.

“Tajoura held at least 600 migrants and refugees—including women and children. The airstrike that left scores dead, also left dozens injured. For that reason, we expect the final death toll to include many more victims,” the statement said.

The rest of it reads:

Our two organizations strongly condemn this and any attack on civilian life. We also call for an immediate end to detention of migrants and refugees. We call for a guarantee of their protection in Libya.

Nonetheless, such an attack deserves more than condemnation. UNHCR and IOM believe a full and independent investigation is required to determine how this happened and who was responsible, and to bring those individuals to account. Coordinates of such centres in Tripoli are well known to combatants, who also know those detained at Tajoura are civilians.

Tajoura held at least 600 migrants and refugees—including women and children. The airstrike that left scores dead, also left dozens injured. For that reason, we expect the final death toll to include many more victims.

Including those victims at Tajoura, some 3,300 migrants and refugees remain arbitrarily detained inside and around Tripoli in conditions that can only be described as inhumane. Moreover, migrants and refugees face increasing risks as clashes intensify nearby. These centres must be closed.

We are doing all we can to help. IOM and UNHCR have dispatched medical teams, while a wider UN inter-agency team awaits clearance to visit the area. We remind all parties to this conflict that civilians must not be targets and must be protected under both International Refugee Law and International Human Rights Law.

The ongoing conflict in the Libyan capital has forced nearly 100,000 Libyans to flee their homes. UNHCR with partners that include IOM has relocated more than 1,500 refugees from detention centres near combat to safer areas. Separately, in 2019, IOM’s Voluntary Humanitarian Return operations have assisted in the departure of more than 5,000 vulnerable individuals returning to 30 countries of origin in Africa and Asia.

IOM and UNHCR urge the broader UN System to condemn this attack and end the use of detention in Libya. Moreover, we urgently call on the international community to provide humanitarian corridors for migrants and refugees to be evacuated out of Libya. For the sake of all in Libya, we hope that States with influence will redouble their efforts to cooperate in urgently bringing an end to this terrible conflict.