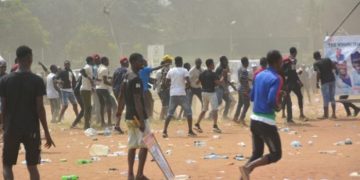 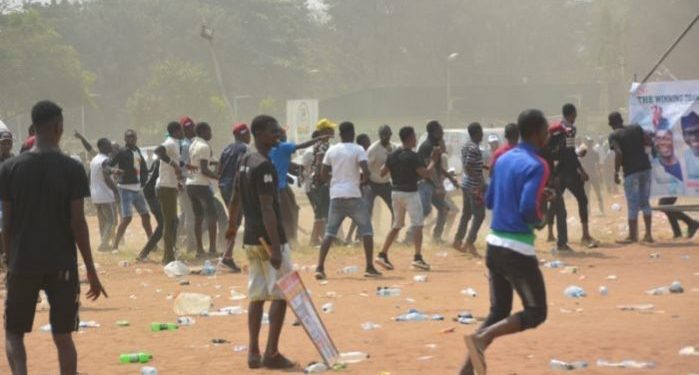 Reports said the hoodlums, said to be members of the National Union Road Transport Workers (NURTW), invaded the Skypower Ground Ikeja venue of the campaign with guns, daggers and other dangerous weapons.

A leader of the NURTW, Musiliu Akinsanya a.k.a MC Oluomo, was among the injured. He was stabbed as some of his boys reportedly clashed with some other members of the transport union.

The violence broke out mid-way into the programme, cutting short the event as the hoodlums were said to have shot sporadically in different directions, engaging each other in a fight.

Members of the party scampered for safety to avoid being hit by bullets being fired indiscriminately by the hoodlums, while security operatives tried to control the situation.

Lagos state governor, Akinwunmi Ambode, his deputy, Idiat Adebule, the party’s governorship candidate; Babajide Sanwoolu, and other prominent members of the party were escorted out of the venue as people scampered for safety to avoid being hit by bullets flying from different directions.

Those who suffered bullet wounds including MC Oluomo were rushed to a hospital where they are currently responding to treatment.

In a statement signed by its Director, Lanre Arogundade, the IPC reminded all political parties that the Nigerian Media Code of Election Coverage obligates them to ensure the safety of journalists covering their activities including campaigns.

The statement called on the Lagos APC to urgently take appropriate steps to apprehend the alleged perpetrators of the bizarre attack with a view to handing them over to the law enforcement agencies for immediate prosecution, also as provided by the Code of Election Coverage.

It also called on all journalists covering the on going campaigns to keep themselves abreast of all safety measure. “They should learn to stay away from political activities where rival gangs engage in show of force especially through display of weapons,” the council said.

It added: “Journalists covering the elections should also bear in mind that they constitute dangerous assignments requiring them to take insurance cover especially from their employees.

“IPC appeals to the security agents on electoral duty, especially the Police, to consider the protection of journalists as part of their responsibility as envisaged by and indeed provided for by the Nigerian Media Code of Election Coverage.”