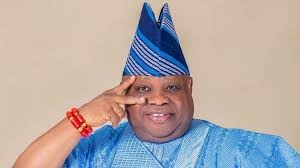 The Department of State Services(DSS) has reportedly withdrawn its officers attached to the Osun State Governor, Sen. Ademola Adeleke, for hurling insults at them.

A socio-political group, Osun Shall Rise Again(OSRA), had in a statement signed by its chairman and secretary, Lanre Akeju and Saheed Bakare respectively, claimed that Adeleke will personally appear at the DSS headquarters in Abuja over the matter.

The group disclosed that Adeleke had been insulting the officers attached to him for a while before the personnel made official complaints to the state command.

“It is unfortunate that Governor Ademola Adeleke’s unguarded utterances has led to DSS withdrawing their personnel from him. Despite the fact that top official of the department called to caution the governor, they (Adeleke and his sister) hauled more insults on the officers.

“The development angered the DSS headquarters and after making contacts, they decided to withdraw their personnel.

“After the withdrawal, the governor pleaded with the DSS command for another chance. He is being expected in Abuja on Monday, where he will be explaining himself and reassure the DSS that he can be trusted with their officers,” the group said.

Reacting, Adeleke said there is no cause for alarm over the matter.

Adeleke,who spoke through his spokesperson, Mallam Olawale Rasheed, said: “The Executive Governor is still setting up his team from security to other areas of the new government. Many issues are being addressed.

“So on this particular one, I can assure you there is nothing like crisis or otherwise. If there is an inter-agency rivalry, relevant authorities will address it. I can assure the public that there is no cause for alarm. This administration is still at a formative stage.”