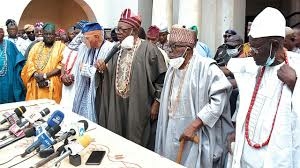 The elevation of the former governor, who holds the title of Osi Olubadan follows the vacuum created by the demise of the former Olubadan, late Oba Saliu Adetunji, Aje Ogungunniso I, which paved the way for the promotion and installation of Oba Balogun as the 42nd Olubadan.

A statement issued on Thursday by Me Oladele Ogunsola, the media aide to the monarch, said the promotion of Ladoja would pave way for the upward movement of the High Chiefs behind him as discussed at the last meeting of the Olubadan Advisory Council.

According to the statement, the installation ceremony will hold at the palace in Alli Iwo.

“Following the promotion of the former governor, High Chief Eddy Oyewole who presently holds the title of Ashipa Olubadan would become Osi-Olubadan and High Chief Biodun Kola-Daisi would move from Ekerin Olubadan to become Ashipa Olubadan.

“Similarly, the current Ekarun Olubadan, High Chief Hamidu Ajibade would be installed as the Ekerin Olubadan while the trail blazer in the private ownership of radio stations in the ancient metropolis, the promoter of Splash F.M, Senior Chief Adebayo Akande, the current Maye Olubadan moves up to become High Chief with the title of Ekarun Olubadan,” the statement added.