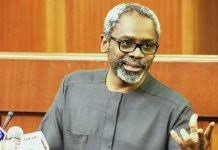 Speaker of the House Representatives,Hon. Femi Gbajabiamila has named the Principal Officers of the house from the ruling All Progressives Congress(APC).

Doguwa was the Chief Whip in the eighth House.

Doguwa, in a brief remark thanked God for sparing his life to witness the day he became the Leader of the House.

“According to the rules of the House, the leadership of the House has now been legally constituted,” he added