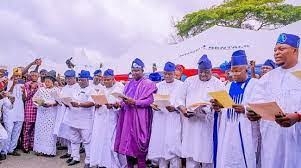 The Osun State Independent Electoral Commission (OSIEC) has announced the withdrawal of certificates of return given to all elected local government officials in the October 15 election.

The All Progressives Congress (APC) was the only party that fielded candidates for the chairmanship and councillorship positions during the election and OSIEC returned all of them elected.

However, delivering judgement in a suit filed by the Peoples Democratic Party (PDP) against OSIEC, APC and some of its chairmanship candidates last Friday, Justice Nathaniel Ayo-Emmanuel of the Federal High Court, Osogbo, nullified the election citing non-compliance with the 2022 Electoral Act.

In a statement signed by its Executive Secretary, Adedapo Adejumo, on Monday, OSIEC stated it would not appeal the judgement.

The commission also admitted that it did not comply with the provisions of Section 24 of OSIEC Law, 2022, and Section 28 of the Electoral Act 2022, which mandated it to give a notice of 360 days before the conduct of the election.

“The decision of the Commission is coming against the backdrop of OSIEC’s failure to follow strictly the provisions of Section 24 of OSIEC Law, 2022 and Section 28 of the Electoral Act 2022, which mandate the Commission to give a notice of 360 days before the conduct of the election.

“In view of this, OSIEC aligns perfectly with the decision of the Federal High Court, Osogbo, as the elections stand nullified.

“Consequently, the certificates of return already issued to the purportedly elected chairmen and councillors are hereby withdrawn with immediate effect,” Adejumo said.

Meanwhile, Osun State Governor, Ademola Adeleke, has directed career heads of Local Government Areas and Local Council Development Areas in the state to take control of their councils from the sacked council chairmen and councillors.

The directive was contained in a statement issued by the governor’s spokesperson, Malam Olawale Rasheed.

According to Adeleke, the directive is with immediate effect.

“Governor Adeleke also directed the most senior career heads across all the local government areas to take charge of their councils.

“This is in compliance with the judgement of the Federal High Court sitting in Osogbo that sacked the local government chairmen and councillors,” Rasheed said.