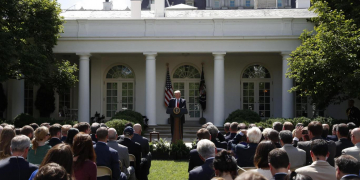 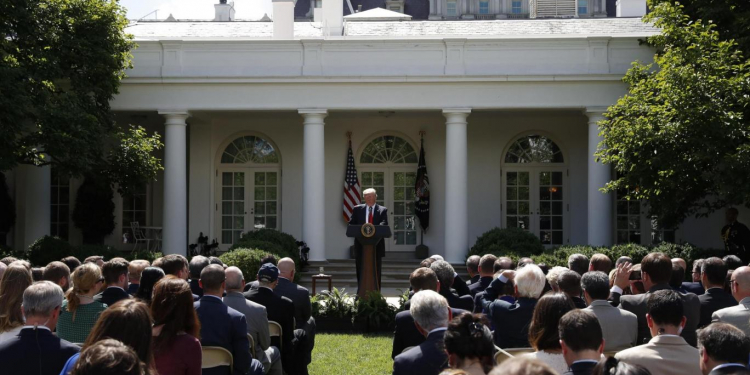 President Donald Trump on Thursday announced that the US was pulling out of the Paris climate agreement.

The US president argued the Paris accord is a bad deal for American workers and was badly negotiated by his predecessor Barack Obama.

Under the pact, the United States committed to reducing its emissions by 26 to 28 percent from 2005 levels by 2025.

Mr Trump said: “I’m fighting every day for the great people of this country.

“Therefore in order to fulfil my solemn duty to protect America and its citizens the US will withdraw from the Paris Climate Accord but begin negotiations to re-enter either the Paris accord, or an entirely new transaction on terms that are fair to the United States, its businesses, its workers, its people, its tax-payers.”

He added that he “cares deeply about the environment” but “cannot in good conscience support a deal that punishes the United States”.

The president continued: “Not only does this deal subject our citizens to harsh economic restrictions, it fails to live up to our ideals.

“This agreement is less about the climate and more about other countries gaining a financial advantage over the United States.

“The bottom line is the Paris accord is very unfair, at the highest level, to the United States.”

“I believe the United States of America should be at the front of the pack. But even in the absence of American leadership; even as this Administration joins a small handful of nations that reject the future; I’m confident that our states, cities and businesses will step up and do even more to lead the way, and help protect for future generations the one planet we’ve got.”

Reactions that followed the announcements from outside the US were quite critical.

French President Emmanuel Macron, German Chancellor Angela Merkel and Italian Premier Paolo Gentiloni in a joint statement said they regard the accord as “a cornerstone in the cooperation between our countries, for effectively and timely tackling climate change”.

Macron, in his address, switched to English and said to Trump: “We all share the same responsibility: make our planet great again”

Greenpeace took to Twitter to say: “By withdrawing from the Paris agreement, Trump has turned the US from a climate leader into a climate deadbeat.”

Bob Iger, the chairman and CEO of The Walt Disney Company, after the announcement resigned from President Trump’s advisory council on policy over Trump’s withdrawal from the Paris climate deal.

Tesla CEO Elon Musk also resigned from the council, tweeting: “Climate change is real. Leaving Paris is not good for America or the world.”

However other CEOs said they would stay on the advisory councils, including Ginni Rometty of IBM, Brian Krzanich of Intel and Michael Dell of Dell.