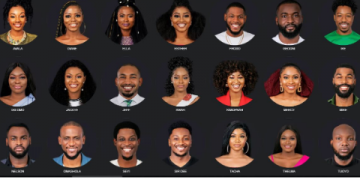 The much awaited Big Brother Naija Season 4 kicked off Sunday night with 21 house mates who will battle for 60million naira worth of prize money over a period.

At the launch, Popular media personality, and host of the show, Ebuka Obi-Uchendu ushered the housemates into the #BigBrotherNaija house with the edition themed: “Pepper them”.

The housemates would be staying at the Big Brother house in Nigeria for the next eleven weeks.

Diane
Diane Yashim describes herself as an easy going girl. She is a model and a graduate of the University of Debrecen in Hungary.

Victoria Ella Nnabuchi is already in the limelight. The 30-year-old is a television presenter, actress, model and voice-over artist.

Esther Olaoluwa Agunbiade, 22, is a Lagos based lawyer. She was called to bar last year.

Steve Ikechukwu Onyema, 26, hails from Imo State but grew up in the US.

Isilomo Braimoh is a Lagos resident but hails from Edo State. The 27-year-old woman is a Human resource manager. She has an MA in Human Resource Management with professional certification.

Jackye is a 27-year-old software engineer who led her team to win a contract to build a Fintech app for one of the biggest companies in Africa.

Jeff, 30, hails from Anambra State but resides in Jos. He is a banker.

Mike Edwards is a married man. Mike owns the first Black-owned cigar line in the United Kingdom and he’s also a professional athlete

Khafi Kareem is a police officer. She hails from Ekiti State but resides in London.

26-year-old Mercy Eke is a video vixen and businesswoman based in Lagos.

Nelson Allison was Mr. Universe Nigeria 2018. He hails from Rivers State and he is 26 years old.

Omashola is a model and entrepreneur who hails from Delta State but now calls Lagos home.

Oluwaseyi Awolowo is an entrepreneur who has once tried to commit suicide but has since risen above the dark period.

Real name, Atteh Daniel Tioluwa, is a banker and graphic designer from Kaduna State. He is 27-year-old.

Tasha is a 23-year-old lady from Rivers State.

Thelma Ibemere is a 26-year-old lady