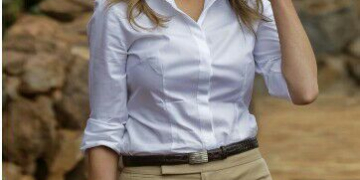 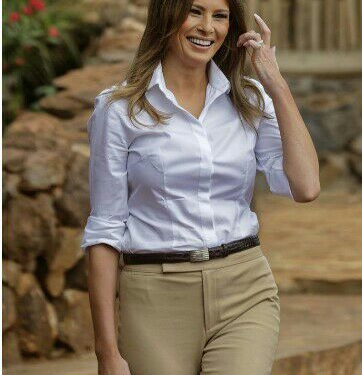 The First Lady of America, Melania Trump, has come under heavy criticism for saying that victims of sexual assault need to show evidence of sexual harrasment.

VIDEO: Baba Ijesa cries for help as he battles deadly ailment in prison

During her visit to Kenya, Melania made time for an exclusive interview with ABC News. The preview of the interview which will be aired on Friday was released online.

The interviewer, Tom Liamas, asked the first lady what she thought about the Me Too movement, a global campaign encouraging victims of sexual crimes and concerned individuals to speak up.

She said: “I support the women, and they need to be heard. We need to support them and also men, not just women.

Liamas then asked if the men that are accused have been treated unfairly.

She replied:”We need to have really hard evidence, you know that if you accuse someone of something, show the evidence.”

Llamas challenged that response, saying “You need to stand with women”.

“I do stand with women,” she insisted, adding: “But we need to show the evidence. You cannot just say to somebody, ‘I was sexually assaulted’ or ‘you did that to me’ because sometimes the media goes too far in the way they portray some stories. It’s not correct. It’s not right.”

The video has generated a lot of reactions on Twitter. Below are some reactions of women on the platform.

— Laura Dail @tazztunes October 10, 2018
There’s absolutely no evidence of the abuse and assaults that I went through at the ages of 7, 10, and 12 by different people. Sorry Melania! I guess my 7-year old self should have kept DNA evidence that we couldn’t even test 35 years ago.

— Theresa Maria Conde @conde_theresa October 10, 2018
@FLOTUS Mrs Trump I cry as I text you I am 57 & @ 17 I was sexually assaulted The only proof is my memories I am disgusted & still hurt by the pain Please don’t say there must be proof sexual assault doesn’t usually have witnesses try to understand #MeToo I send my respect to you .

-Noemi G @ayyomamita October 10, 2018
Sooooo if you were sexually assaulted and you don’t have proof because it was between you and whoever BUT it happened you need to just forget about it basically since there isn’t way to really prove it??? F&@k outta here Melania

-Heather LePage @HeatherJLePage October 10, 2018
If you have no evidence, don’t bother coming forward. Right. That’s where we’ve been and that’s where we will stay. What kind of evidence must a woman produce in order for you to believe her?

-Diana P Velasquez @lapaisa65 October 10,2018
Yes like I’m being assaulted & 1st thing to cross my mind is “let me get some hard evidence of this”. She’s a piece of work just like her husband, she puts up with his cheating & assault of women with overwhelming evidence!

[email protected] October 10,2018
So the women attacked by her husband had to be in front of a camera while it was happening

The Me Too movement  (#MeToo), with many local and international alternatives, is a movement against sexual harassment and sexual assault.

#MeToo spread virally in October 2017 as a hashtag used on social media in an attempt to demonstrate the widespread prevalence of sexual assault and harassment, especially in the workplace.

EXCLUSIVE: "I support the women and they need to be heard," first lady Melania Trump tells @ABC’s @TomLlamasABC when asked if she supports the #MeToo movement, but says "you need to have evidence" to accuse someone of sexual assault. https://t.co/V3BYtwPY1O pic.twitter.com/pyLrXCoY8S