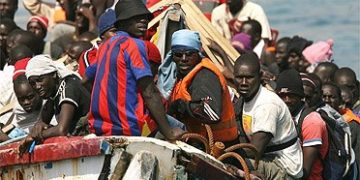 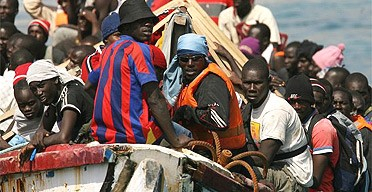 Data released by the United Nations Department of Economic and Social Affairs in 2017 revealed that 60 per cent of Africa’s population is below the age of 25. That translates to about 720 million people. Ideally, this demographic data should a pool of human resources being used to drive economic development but the reality is that they are ready hands for the proverbial “devil’s workshop” owing to the huge youth unemployment on the continent. Many have described this reality as “a ticking time bomb,” which should have exploded a long time ago if not for the mass exodus called migration.

Migration, has over the years, been dissipating the heat and pouring it into and across the Atlantic Ocean and the Meditarranean Sea as skilled, educated and well to do youth, take easy channels across the Atlantic to North America via scholarships, visa lotteries and family ties; while the less skilled, less educated but desperate ones embark on perilous journeys through the Sahara desert to North Africa, where they cramp themselves on rickety boats in their hundreds, damning the fatalities of a voyage across the Mediterranean Sea en route Europe. These migrants include men, women and children.

A recent survey conducted by Afrobarometer, a pan-African, non-partisan research network revealed that about half of Africa’s young and highly educated citizens are considering migration. According to the survey, “by far the most frequently cited reasons for emigrating are to look for work (44% on average) and to escape poverty and economic hardship (29%).” Other reasons are to pursue educational programmes (6%) and tourism (5%).

It is therefore instructive to peep into Africa’s future within the gamut of these migration figures. Even though UN projections say Africa’s youth population will double in 2030, the effect of the ongoing emigration which peaked in the last 15 years, was made evident in the UN 2017 report, which puts percentage population of those aged between 15 and 59, for each continent as follows: Africa, 54 per cent; North America, 59 per cent; Europe, 60 per cent; Oceania, 60 per cent; Latin America & Caribbean, 63 per cent; Asia, 64 per cent. A deductible fact from these statistics is that if actually, 15-59 year olds are those actually capable of both skilled and unskilled work, Africa currently has the smallest workforce.

According to the 2017 Gross Domestic Product (GDP) figures released by the International Monetary Fund, Asia, which, going by the statistics above, has the largest workforce, has the highest GDP of $30,220 to show for it. North America and Europe come next with GDPs of $23,550 and $21,820 respectively. According to Afrobarometer, “Europe and North America are the most popular destinations for young people going outside Africa. The survey said 27 per cent of African migrants prefer Europe while 22 per cent prefer North America. Asia is successfully putting its massive population to work. Africa, either by intention, negligence or providence, has done the exact opposite, thereby causing its people to move to Europe and North America to reinforce their declining populations, effectively putting the push and pull factors of migration on four legs.

A micro-representation of Africa’s loss of valuable manpower is in the agricultural sector. In a 2016 article titled “How illegal migration to Europe is contributing to a dwindling Gambia’s farming sector”, Kebba Jeffang relayed the frustration of a farmer in the Upper River Region of Gambia. The farmer, Kani Camara, regretted that farming activities in the region have dipped because of the movement of young people from the area.

Camara was quoted as saying: “It pinned down the farming activity in our area seriously, because everything you could do as a farmer is to pay people to cultivate for you because our brothers and sons have gone. At the sowing stage, weeding, and harvesting which all require costs we have to pull out money.

“This is disturbing, although when they are successful in Europe we will enjoy it but truly speaking it has really affected our season already.”

In the same article, Camara’s hopes of the migrants succeeding in Europe in order to send money back home was punctured by Lamin Fadera, another farmer in the Kiang Lower River Region of the country

“Although this is the case sometimes but not all times and to be honest the numbers of youths in Italy without paper are too many that their contribution to the family is limited for the past years or months.”, Mr Fadera said. He also regretted that the year’s farming season was a challenge since they could not get help on the farms. “What do you expect as gains after the season?” the elderly man asked rhetorically.

The migration figures do not only prove that Africa is losing valuable human resources to other continents. It shows a more painful reality in that a lot of these youngsters end up as modern day slaves when they do not end up in the belly of the sea.

Since the International Organisation for Migrations (IOM) started its Missing Migrants Project (MMP) in 2014, it has recorded the deaths of 31,626 migrants, including 667 in 2019. It even stated on its website that “due to the challenges of collecting information about these people and the contexts of their deaths, the true number of fatalities during migration is likely much higher.”

In 2015, over one million migrants entered the European Union through the Mediterranean Sea, but 3,777 others lost their lives in the attempt to do so. In 2016, the fatalities were higher; about 341,055 reached Europe but 4,271 died in the sea. Most of the dead were from Nigeria, Ghana, Mali, Ivory Coast and Togo.

Last December, an IOM consultant, Mr. Osita Osemene, speaking at a parley in Nigeria’s capital, Abuja, confirmed that “there are also reports of worsening exploitation and abuse during migrant journeys, particularly in Libya.” Osemene, who is also the Project Coordinator, Patriotic Citizen Initiatives, explained further that other risks for women include rape; turning to prostitution in desperation and extortion. Having also undertaken the dangerous journey in the past, Osemene, speaking from experience, revealed that “the risks in Libya include arbitrary arrest and detention, harassment, bonded labour and labour exploitation.”

He added: “While in 2014 it was generally understood that militia groups in Libya maintained detention centres to create a market for their smuggling services, the research suggests that such centres are now hotspots for the trafficking of migrants.

“There are generally three main stages to a migrant’s experience in Libya: being held hostage on arrival and asked for ransom; if unable to pay his/her release, the migrant is put to work; sometimes, after working in a situation of slavery, the migrant is taken to the port and put on a boat to Europe.”
In as much as this article stresses the negative consequence of migration to Africa in addition to the carnage on and across the Mediterranean, the crisis arising from it is not an Africa-only problem. It is a global problem that requires global action.

A 10-point plan put forward by the EU in the wake of the 2015 migrant tragedies aims at preventing tragedies in the Mediterranean but they hardly can stop the push effect.

Francesc Ortega, an economics professor and immigration expert at the City University of New York — Queens College, told Washington Post in a phone interview in 2015 that “the smuggling across the Mediterranean and “the migratory pressures to Europe are something that’s not going to go away” if legal pathways to migrate to Europe remain limited while poverty and conflicts continue to push people out of Africa and the Middle East.

Solving the migration crisis requires sincere, deliberate actions and long term plans in addition to the cosmetic solutions of search and rescue operations on the Mediterranean Sea. The push and pull factors which determine migration need to be properly addressed.

The anti-immigration political movements and sentiments growing in migrant-destinations in Europe – Germany, UK, Austria, Italy, Czech Republic, Hungary and Poland all base their anti-immigration stance on understandable notions that migrants become a burden of crimes and cultural dilution but as Sean Byrne, a lecturer in economics at the Dublin Institute of Technology, puts it in a 2018 article on RTE, “the research on whether migrants are a benefit or a burden to the country to which they migrate shows that their impact depends on their skills and labour market conditions in the countries to which they migrate”.

Byrne pointed to OECD studies that show that migrant workers fill niches in both fast growing and declining sectors of the economy, arguing further that “in most OECD countries, migrants contribute more in taxes and social contributions than they receive in benefits.” Byrne recalls that Germany, recognising that its population will decline in the absence of immigration, has shown leadership by agreeing to accept 800,000 Syrian refugees.
So, instead of opposing migration and creating more desperate migrants even when there is a need to fill the gap left by declining birth rate, Europe may take increase access for skilled migrants and create policy frameworks to accommodate the unskilled.

“Some of these migrants will want the economic benefits of living in Europe while maintaining their own cultures, including such practices as forced marriages, honour killings, female genital mutilation and the persecution of gay people,” Bryne said, reflecting some of the anti-migrant sentiments. He however maintained that “resolving this conflict of cultures, he posits, will be the greatest challenge facing Europe over the next 50 years.”

Part of that resolution may include establishing legislative and cultural codes for migrants to accept. After all, no nation should allow the erosion of its hard earned freedoms and identities.

As for the push factors, African leaders should LEAD in the true sense of the word. They should harness the vast resources on their lands and waters to create work and wealth for their people. The rest of the world should work with it to stem instabilities in Mali, Libya, Democratic Republic of Congo, Central African Republic, Sudan, Eritrea, and terrorism in Somalia, and parts of Nigeria, Kenya, Cameroon and Niger. The financial operations of the World Bank and IMF should also be targeted at truly helping these nations build infrastructures and attract economic investments while fighting poverty and diseases in Liberia, DR Congo, Uganda and Tanzania.

In conclusion, if Africa eventually succeeds in keeping all its young people from migrating, will Europe and North America die off gradually with their ageing and declining populations? No! No matter how stable economies are, humans, just like animals, will continue to migrate because migration is a natural phenomenon, driven by geography, environment, politics, economics, laws, culture and many others. The goal is to stop the crisis of migration as we currently have it.