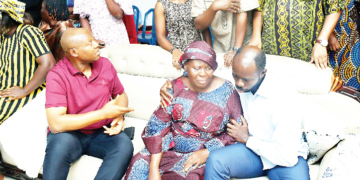 Mother of late Omobolanle Raheem, the lawyer shot dead by ASP Drambi Vandi, a police officer attached to the Ajiwe Police Station,  Ajah, Lagos State, has disclosed that the victim was pregnant with twins.

The bereaved woman, according to TheCable, spoke on Tuesday during a condolence visit to the family by the Commissioner of Police, Abiodun Alabi.

“I cannot see my ‘The Law’ again. People usually call her ‘The Law’. She was taken away from me. She was pregnant with twins.

“She died with her glory. She left a five-year-old daughter behind.  And they took her away.

“On Monday, my granddaughter came to me and said ‘Grandma Iju Ishaga, I saw you yesterday when you were crying; you were shouting; is it because of my mummy?’ And I said ‘yes’.

“Then she came again and told me, ‘Pastor Jerry said what God cannot do does not exist; so, grandma, stop crying’. And she kissed me on the cheek.

“It is not easy. A child that I have been training since childhood. I suffered over her. I hawked oranges; there is nothing I did not do,” she said.

Speaking, the Attorney General said: “We have the permission of Mr Governor to tell you that justice will be done in this matter. The matter will be charged to court as soon as the police send us the case file. I will be leading the prosecution to show the seriousness the government attaches to this matter.”

Meanwhile, Lekki Estates’ Residents and Stakeholders’ Association, has called for immediate action to stop the killing of its members by policemen.

The association’s president, Olorogun Emadoye, in a statement said that the group had started engaging with relevant authorities to find lasting solutions to such incidents.