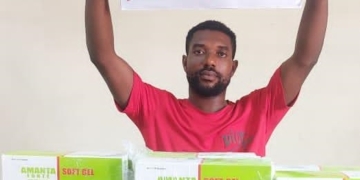 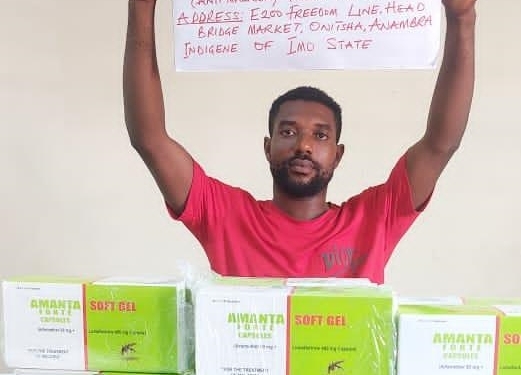 The National Agency for Food and Drug Administration and Control (NAFDAC), has arrested a 32-year-old businessman, Obinna Igbo, for alleged importation and sale of fake Amanta Forte soft gel, an unregistered anti-malarial drugs.

This was contained in a statement issued in Lagos by the Resident Media Consultant to NAFDAC, Sayo Akintola, on Monday.

According to the statement, the defendant sold the fake drugs at Shop E200, Freedom Line, Onitsha Head Bridge market, after importing  same into the country.

The NAFDAC boss said that the three shops were placed on hold while the managing directors were invited for further interrogation.

She noted that the three suspects were interrogated independently and their statements extracted, adding that they claimed to have  sourced the product from one Blessed OJ Don Global Link in the market, which Igbo was the managing director.

Adeyeye explained that a tracking device was engaged to track him to Onitsha where he was eventually arrested and taken into custody by the Investigation and Enforcement Officers of NAFDAC office in Asaba, before he was transferred to the Lagos office.

After his arrest, Igbo said he has other pharmaceutical products which he also imported into the country, adding that some of the drugs are anti-hypertensive.

Igbo, in his statement, acknowledged that he sold the product to the shops visited during the raid by NAFDAC.

He was subsequently arraigned before a Federal High Court on four-count charge of unlawful importation, possession, sale, and distribution of fake Amanta Forte soft gel.

Igbo, however,  pleaded not guilty before Justice Tijani Ringim.

The judge remanded Igbo in a correctional facility pending a formal bail application and adjourned the case till June 6, for trial.

'My story has ended' -Lewandowski insists on leaving Bayern Munich