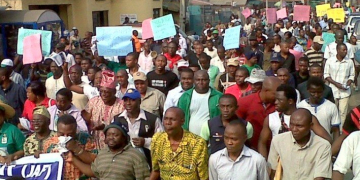 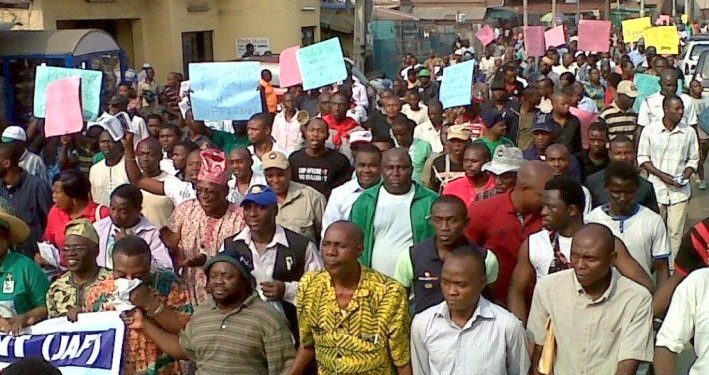 The National Association of Nigerian Students, NANS, Thursday, made a U-turn in their protests against the recent hike in petrol pump price.

The group which had since last week been protesting against the hike in various states and vowing to occupy Nigeria this week, came out today to express support for the new price of petrol, stating that the Nigerian economy is sinking and badly battered, and therefore, incapable of bearing the burden of fuel subsidy.

President of NANS, Comrade Tijani Shehu, who addressed newsmen in Abuja, also stated that NANS had reached an agreement with the Federal Government as concerning palliatives for students.

“ NANS recognizes that Nigeria is faced with the crisis of deciding its future from present realities of economic challenges, and this justifies the reasons for the agitation for reversal of the pump price of N86.50 by some members of the public.

“NANS recognizes that the economy is sinkin g, and however, we blame the government for allowing the situation to generate to position where Labour Unions will find it difficult to appreciate, accommodate policies and be on the same page with them.”

He maintained that there is no justification for the Federal Government to continue subsidizing imported petroleum products, adding that the removal of subsidy would guarantee availability of petrol across the country.

“We worry that the Federal Government, instead of completely deregulating the importation of petrol is still controlling the business through issuing of licenses, and there is no assurance that the modular refineries will be operational before 24 month”.

He also argued that the defense of the Federal Government on the diversion of petrol to neighbouring countries is an indictment on the security apparatus of the Buhari-led government.

On the understanding reached with the Federal Government concerning palliatives, Shehu stated that it was agreed that the government should halt any further increment in tuition fees and other auxiliary fees in all institutions of higher learning.

“Understanding was also reached that government should provide buses to tertiary institutions of higher learning, two per institution, to ease transportation on campuses; distribution of camp gas cylinders to all Nigerian students.

“It was also agreed that government should engage students across the four zones of NANS in a town hall meeting to enlighten students on the policy; provide immediate employment to graduates; establish an independent service monitoring group to monitor the current price ceiling of N145 per litre and also establish a students’ trust fund.”

“A directive has been issued to all tertiary institutions to shut down all campuses on Tuesday and Wednesday, next week.  After that, they will all converge on Abuja for a mass protest.