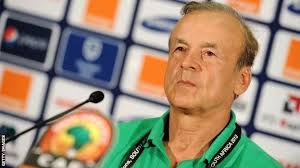 The Nigeria Football Federation has appointed a technical adviser for the Super Eagles. He is Gernot Rohr, a German.

NFF President Amaju Pinnick confirmed that Rohr is currently working on development programmes for the German Football Federation and is expected to arrive in Nigeria on Saturday.

He is also expected to be in Lagos on Sunday where he would be at the stands to watch the league match between Ikorodu United and Sunshine Stars.

Pinnick was quoted as saying:

“We are just tying up the little details left to be handled. The work started quite a while ago but there was the need to wait until everything firmed up before making it public.”

It was also confirmed that he would be introduced to Nigerians in Abuja on Monday.