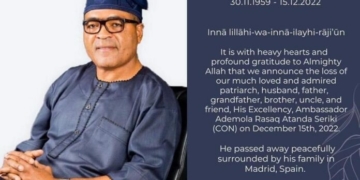 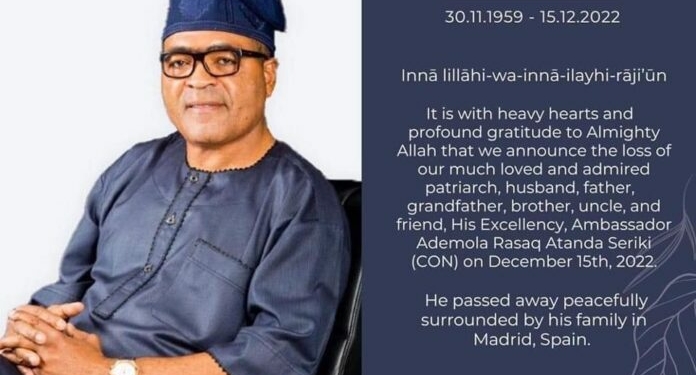 The politician reportedly died in Madrid, Spain in the early hours of Thursday. He was aged 63.

His death was announced in a notice signed by his children, on Thursday.

“It is with heavy hearts and profound gratitude to Almighty Allah that we announce the loss of our much-loved and admired patriarch, husband, father, grandfather, brother, uncle and friend, His Excellency, Ambassador Demola Seriki, on December 15, 2022.

“He passed away peacefully surrounded by his family in Madrid, Spain,” the notice read.

Born on November 30,1959, Seriki was a politician, teacher, businessman, and public administrator.

He served as the Nigerian ambassador to Spain, a position he assumed in January 2021, with concurrent accreditation as a permanent representative of Nigeria to the United Nations World Tourism Organisation, until his death.

He previously served as Nigeria’s Minister of State for Defence under the late President Umar Yar’Adua.