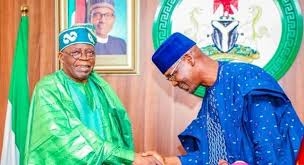 Nasarawa State Governor, Abdullahi Sule, of has said Nothern governors under the All Progressives Congress (APC) will use their resources to ensure that the party’s flagbearer, Asiwaju Bola Tinubu, emerges president in the 2023 election.

Speaking at the campaign flag off of the party’s senatorial candidate for Nasarawa West, Architect Shehu Tukur, in Kokona Local Government Area at the weekend, Sule said only God can stop Tinubu from succeeding President Muhammadu Buhari.

“APC Northern governors will use their resources to ensure that Tinubu emerges president of the country. If there is anybody that wants Tinubu to become president, it’s the Northern APC governors.

“Only God can stop Tinubu and A. A. Sule from becoming president and governor respectively. We are determined to commit our resources and strength to conquer any form of opposition.

“Our goal is to return Tinubu, our three senators, five House of Representatives and 24 state assembly members as elected,” he said.

“These are blatant lies. The APC Northern governors stood firm for Tinubu to emerge, they will do anything to make him president. Disregard any of such lies emanating from people who are seeking favours from Tinubu,” he stated.

In his address, National Chairman of the APC, Senator Abdullahi Adamu, urged the people to vote for all the candidates of the party from top to bottom.

He said it will not augur well for Tinubu and Sule to emerge president and governor respectively, but to have members of the opposition in the national and state assemblies.