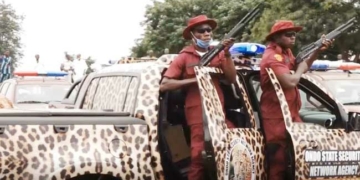 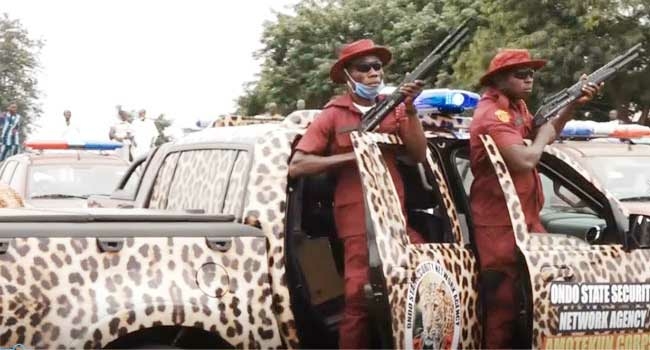 Operatives of the Ogun State Security Network, codenamed Amotekun Corps have arrested two suspects for being in possession of a carbonised human skulls.

The Commandant of the Corps, David Akinremi, disclosed this in a statement on Friday, adding that operatives also arrested four other suspects for alleged kidnapping, cultism, conspiracy and stealing.

Akinremi said that all the suspects have been transferred to Ogun State Police Headquarters, Eleweran, for investigation and prosecution

According to him, they specialised in exhuming corpses at the Agunboye burial ground, removing the skulls, and later selling them to other members of their ritual gang.

“On November 4, one Ibu Benjamin of Ayegbami quarters, Agunboye Ijebu-Igbo reported at Amotekun office at Ijebu-Igbo that, on the same date, he discovered that one heavy iron pallet, valued at N350,000, property of his landlady, Mrs. Idowu, kept within the precincts of a fenced farm and a house yard at Agunboye was stolen by unknown persons.

“Consequently, operatives of the corps embarked on intelligence activities with a view to getting those behind the crime.

“Their efforts paid off on November 20,with the arrest of these two suspects, Busari Aliu and Adetayo Segun, who not only admitted their involvement but led our operatives to recover the stolen item where it was kept.

“On searching the house and premises where the item was recovered, some pieces of a carbonated human skull were recovered.

“During interrogation, the suspects confessed that they dug into so many graves in Agunboye burial ground and removed several skulls of buried corpses which they sold to some other members of their ritual gang,” he said.